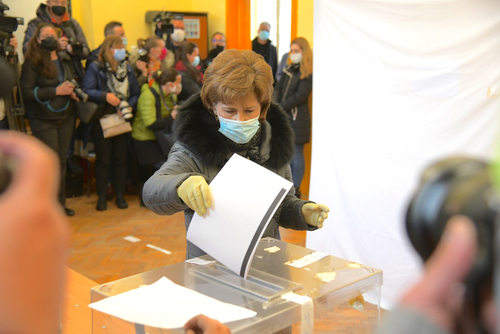 Sofia, Bulgaria - Apr 4 2021: A woman in protective mask and gloves is putting her vote into the voting urn

Brussels (Brussels Morning) Sunday’s snap parliamentary election in Bulgaria failed to produce a clear winner, with the balance of parties unlikely to change significantly compared to the April election outcome, when no party was able or willing to form a parliamentary majority.

With 95% of the votes counted on Monday, former Prime Minister Boyko Borissov’s centre-right GERB party held a very narrow lead ahead of the populist anti-establishment option, There is Such a People (ITN). However, Borissov is unlikely to return to power, given that the other parliamentary parties have publicly stated their absolute unwillingness to form a coalition with him.

Taking the election results into account, ITN leader, TV host and singer Slavi Trifonov said he would not enter a coalition, but he would seek support for a minority government, once Bulgaria’s President Rumen Radev hands him the mandate to form a government.

Trifonov previously rejected both GERB and the social-democratic bloc BSP for Bulgaria after the April elections, saying he would not align with either of the established parties. This forced Radev to call the latest snap election after all three leading parties returned the mandate, unable to form a majority.

Sunday’s poll saw both GERB and BSP lose seats, with ITN winning 12 more to now hold 63 seats in the 240-seat parliament. Together with two anti-corruption parties, Democratic Bulgaria (DB) and Stand Up! Mafia Out! (ISMV), which also fared better than in April, Trifonov would control 114 seats, leaving him just seven short of an outright majority.

Trifonov now faces the difficult task of convincing either the BSP or the ethnic Turkish Movement for Rights and Freedoms (DPS) to support him in parliament without participating in the government. Should he fail to secure sufficient backing, Bulgaria could yet be headed for another snap election.