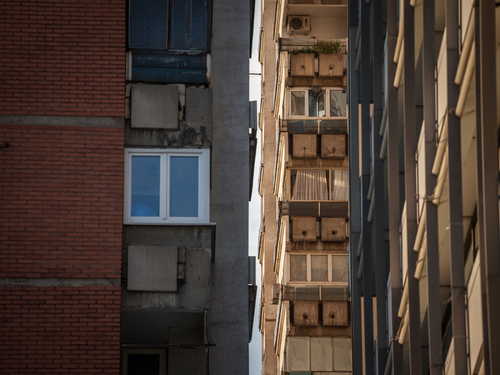 Communist housing buildings, in a decay and dilapidated condition in Belgrade Serbia. This kind of towers are a symbol of Socialist architecture and of the economic transition Eastern Europe faced.

Dr. Anders Åslund is a former Swedish diplomat, a senior fellow at the Stockholm Free World Forum and an Adjunct Professor at Georgetown University. He served as an economic adviser to the governments of Russia, Ukraine, Latvia, Georgia, Kyrgyzstan and to some extent Poland. His research was always policy-oriented and he was the founding director of Stockholm Institute of Transition Economics. He has also worked at the Atlantic Council, the Peterson Institute for International Economics, the Carnegie Endowment for International Peace, the Brookings Institution, and the Kennan Institute for Advanced Russian Studies.

Åslund is not awed by China’s transformation. He feels that a “middle income trap” remains a distinct possibility, while the prosecution of China’s Digital Czar, Jack Ma, echoes that of the Russian energy oligarch Mikhail Khodorkovsky.

Ambassador Tedo Japaridze (TJ): Your career has been marked by a focus on economic transition, from state-driven economies to free-market, serving as an economic adviser to a number of governments across Eastern Europe. Which of these transition programmes do you feel was the most successful and why? And what has frustrated you most throughout those turbulent years?

Dr Anders Aslund (AA): There is little doubt: The two most successful reforms were carried out in Poland 1989-91 and in Estonia 1992-94. The third is Georgia from the Rose Revolution in 2003.

There are several requirements of a successful reform. First of all, it has to be led from the top by a politician who really believes in profound political and economic change. The ideal examples were PM Tadeusz Mazowiecki and Finance Minister Leszek Balcerowicz in Poland from 1989 to 1991 and President Lennart Meri and PM Mart Laar in Estonia.

Second, a strong reform team needs to be appointed. Most importantly, both the political and the reform leaders need to be committed to the success of their nations rather than their families and their fortunes.

Third, the reform team needs to present a proper reform programme. It must not be long – the Balcerowicz programme was one page in a newspaper, but it has to have clear principles: a free market with free prices, free foreign trade, macroeconomic stability, fast privatisation.

Fourth, speed is vital. The reform programme needs to be implemented fast. Otherwise, old reactionary forces will rise and take it down.

As noted by Mart Laar, the fundamental principle is “unless you move fast, you will lose.”

By moving fast and agitating for reform, you also convince a broader constituency about the need for market-oriented economic reform. As noted by Andrius Kubilius, the real test of successful reform is whether the opposition that is likely to come to power after its implementation also subscribes to the reform.

A.A.: This is a good question, but unfortunately today I would say only to a limited extent. I had hoped that Eastern Europe would have done more in terms of deregulation than it has done, while much of Western Europe has proceeded. Also, in terms of social reforms, health care and education, Eastern Europe has been stuck in the old socialist system for too long. One of the few areas where Eastern Europe now looks good is in its simplification of its tax system.

TJ: China had double-digit growth for more than a generation. It now continues to grow into a developed economy and is taking the lead in strategic technologies such as 5G. Is China a special case, or is there a broader lesson to be learned regarding the role of the state in the economy?

A.A.: I am no specialist on the Chinese economy, but I am highly sceptical. The Chinese economy is not very developed. Only in 2020, it overtook the Russian economy in terms of GDP per capita. The Russian economy is stagnant at best. Both these economies have GDP per capita of just over $10,000 a year, which is a standard assessment of the middle-income trap. By international standards, we would expect China to face a “sudden stop” rather soon, meaning that its GDP stops growing. Such an event is usually connected with a financial crisis, which appears long overdue in China given its massive debt levels.

Another factor is that Xi Jingping seems to reverse to old-style communist state government and his approach to Jack Ma looks like the early stage of Putin’s persecution of Mikhail Khodorkovsky. Communist state management is no way to develop an economy.

Third, China has greatly benefited from the education of four million students abroad who have come back to China to develop their economy, of whom about one million studied in the US. Now two things are likely to happen. Many more of these students are likely to stay abroad given how repressive China has become. Furthermore, leading Western countries, such as the US and Australia, are likely to become more reluctant to provide so many Chinese of dubious intentions education.

Finally, the Belt and Road Initiative appears to have been a big humbug scheme for not very developed countries. It is already causing a lot of problematic debt crises, and they are likely to become only worse. Worse, many of these schemes appear heavily overpriced and subject to major corruption. The BRI might be the ultimate blockage to China in the Third World.

To sum up, China is not a very developed economy, and the current communist leadership is turning in a negative direction. China has greatly benefited from intellectual inflows from the West that are not likely to be available in the future, which will all reflect negatively on China’s future economic development. In a not too distant future, it should result in a sudden stop.

TJ: There seems to be a comeback of public economic activism in the West. From monetary expansion to mega-investment projects, there is scope for a bigger state, perhaps more so in the United States than in Europe. Do you feel that the 2008 economic crush and the experience of the pandemic challenges some of the conventional economic wisdom of the 1990s?

A.A.: I think this is a minor issue in Europe. Western deregulation has gone too far. Now is the time to restore elementary government mechanism that should never have been abandoned. In the US, this is a more serious issue, but it is essentially nothing more than a return to the economic policy of the Clinton era.

TJ: What is your view on the structure of the international monetary system? As the global economy shifts to the Pacific, do you feel this will be eventually be reflected in the institutions we use to manage macroeconomic cooperation?

A.A.: There is an old saying. If you are to beat the dollar, you have to have something stronger. There is nothing like it. The second currency in the world is the euro, but the dollar accounts for about 65% of all international payments and the euro for about 25%. For transactions in volatile commodities, it is vital to operate in the most liquid currency, which is the dollar. The Chinese renminbi is not even convertible, so it cannot even come into question.

My overall view is that the rise of China is likely to be moderated in the future. China has done the easy things, and its government appears to be turning away from the heavy lifting that it is now facing.