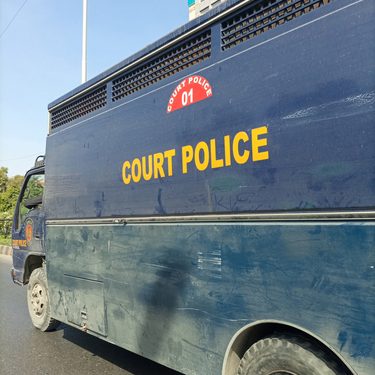 A court van use to transport prisoners' from jail to court. - Karachi Pakistan - Sep 2020

Brussels (Brussels Morning) A Pakistani court, upholding their appeal, has acquitted a Christian couple who, charged with blasphemy, were sentenced to death seven years ago. The original verdict outraged human rights activists and, as the attorney for the appellants asserted in the Lahore court yesterday, Pakistan’s handling of the case had come under fire from the European Parliament recently.

The EP criticised Pakistan over the case last month. Human rights organisations had warned that accusations of blasphemy are often made in Pakistan to settle personal disputes, RFI reported on Thursday.

The couple, Shagufta Kausar and Shafqat Emmanuel, were arrested in 2013 and sentenced to death in 2014 over accusations that they had insulted the prophet Muhammad in a text message, despite the fact that the couple is illiterate.

The two were convicted based on a claim by a shopkeeper who asserted he saw a blasphemous text message written by the illiterate couple.

“I am very happy that we were able to get the release of this couple who are some of the most helpless people in our society”, their attorney Saif ul Malook noted, welcoming the outcome and noting that they would be released next week, after the publication of court orders.

Prosecutor Chaudhry Ghulam Mustafa confirmed that the couple had been acquitted on appeal.

In Pakistan, blasphemy can be punishable by death and accusations can result in vigilante murders and lynchings. The couple comes from the city of Gojra, where a mob put a Christian neighbourhood to the torch in 2009, destroying 77 houses and killing at least seven residents following rumours of blasphemy.

Last month, the EP passed a motion condemning Pakistan, citing reports that tens of people are held in prison there on blasphemy charges.

“The situation in Pakistan continued to deteriorate in 2020 as the government systematically enforced blasphemy laws and failed to protect religious minorities from abuses”, the EP resolution stated.

Identifying the case of Kausar and Emmanuel as especially concerning, the resolution urged Pakistani authorities to overturn the death sentence “immediately and unconditionally”.

The EP also called for a review of Pakistan’s Generalised Scheme of Preferences (GSP) status, which grants the country export privileges in return for respect of human and labour rights.