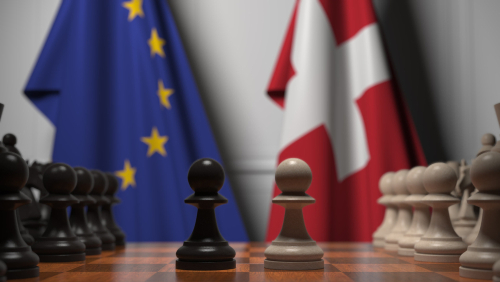 Flags of the EU and Switzerland behind chess board. The first pawn moves in the beginning of the game. Political rivalry conceptual 3D rendering

Brussels (Brussels Morning) The Swiss media reported that the EU-Swiss framework deal for future ties between the traditionally neutral country and the bloc that surrounds it reached a point of near collapse on Wednesday, Reuters reports.

The framework agreement aims to simplify and strengthen ties between Bern and Brussels, with Switzerland currently dependent on more than 100 separate bilateral agreements with the bloc for its access to the EU common market, so vital to the national economy in the eyes of many experts.

As the Swiss government met on Wednesday to discuss the remaining unresolved issues associated with the framework deal, Swiss media were reporting the authorities had come close to breaking off talks over ratification of a draft treaty that was first penned in 2018.

The potential deal is facing loud criticism within Switzerland and among the nation’s politicians. However, a recent poll shows the majority of citizens remain in favour of the deal. Failure to strike a deal would prevent Switzerland from participating in future constructs of the EU single market, including the energy union.

As for the existing treaties, some of them are due to expire or erode, gradually limiting Swiss access to the single market. On Wednesday, a treaty dealing with medical technology exports lapsed, reducing Swiss producers of prostheses, hearing aids and similar goods to “third country” status, which would requirie them to open representative offices in the EU.

The medical technology sector employs more than 60,000 workers in Switzerland, and accounts for nearly 3% of the country’s GDP. This development epitomises the kind of barriers that could yet emerge to threaten and erode trade between Brussels and Bern, which is currently estimated at nearly 230 billion euro.