Belarus drummer sentenced to six years for playing during protests 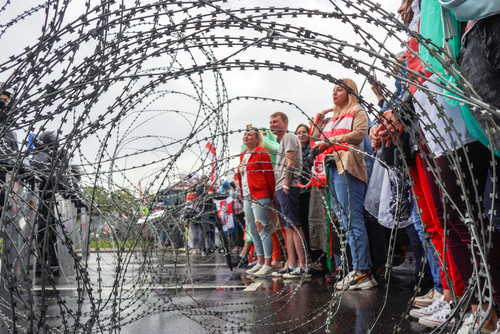 Brussels (Brussels Morning) A Belarusian court sentenced a drummer to six years in prison on Thursday, for playing with his marching percussion band during the protests against the Belarus leader Alexander Lukashenko, AFP reported.

The 30-year drummer, Alexei Sanchuk, was arrested in the Belarus capital Minsk in November, along with several other members of his percussion band. The majority of the band was sentenced to 15-days in jail for participating in unsanctioned protests. Sanchuk, however, was held in custody and a series of more serious charges were filed against him.

According to the Viasna rights group, a Minsk court found Sanchuk guilty of organising and participating in protests. He was accused of blocking traffic, waving a red and white flag, symbol of the Belarus protest movement, and encouraging protesters to clap their hands.

Viasna says the drummer was reportedly beaten after his arrest, and was subsequently forced to appear in a video confession that was aired on state-run television. Thursday’s verdict saw  Sanchuk sentenced to six years in a penal colony.

The protests originally started after the controversial elections held in August last year, when  Lukashenko claimed a landslide victory, an outcome the European Union and Belarus opposition refused to accept as legitimate, claiming the elections were “neither free nor fair”.

In the ensuing protests against Lukashenko, more than 33,000 people have been, with the last significant protest held on 25 March. The protests have since subsided, but many journalists and activists continue to be processed for their coverage or participation in the demonstrations.

At least five journalists covering protests or exposing government misinformation were arrested in March, while two Belarus journalists working for a Polish television channel were sentenced to two years in prison for filming the protests.