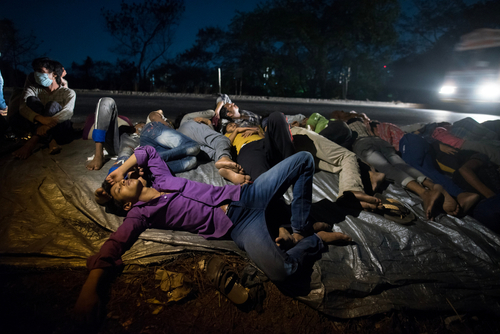 More than 2,000 African migrants reached Lampesuda over the weekend, putting a strain on the island’s reception centre, Reuters reported.

“When we see a huge amount of people coming in a very short time there is a need for solidarity towards Italy”, EU Commissioner for Home Affairs, Ylva Johansson, said at a press conference. She called on other member states to support “relocation” efforts.

Austria’s Europe Minister Karoline Edtstadler, dismissed the EU’s call to support the hundreds of migrants stranded in Italy as the wrong approach.

“Austria is steering a very clear course”, she declared, noting that dispersing the Lampedusa migrants “all over Europe is not an approach that will bring a solution”.

“The EU should rather help people in Africa directly, while also sending a message that not everyone who makes it to Europe can stay there”, she added.

In February, Austria’s Interior Ministry reported that it had received nearly 14,200 applications from asylum seekers in the previous year, the highest number since 2017.

Interior Minister Karl Nehammer announced that economic migrants would be rejected. However, “Asylum procedures for applicants from safe countries should be as short as possible, and they should be told quickly that there is no asylum for economic migrants in Austria”, Nehammer stated.

Lampedusa’s Mayor Salvatore Martello told the Associated Press that 800 migrants were awaiting transfer to a passenger ferry that had been dispatched to Lampedusa on Monday to serve as quarantine quarters. However, rough seas and high winds had prevented the ferry from docking. According to Martello, the 800 are ready to leave, have already been tested for COVID-19, and are to spend 10 days on the ferry.

Earlier in the week, UN High Commissioner for Refugees, Filippo Grandi stated his agency’s support for the proposed EU pact on asylum and migration.

The EU has been struggling with migration since 2015, when more than one million Syrian, Afghan and Iraqi refugees arrived at its borders, mostly via Italy, Greece and Spain.

In 2019, Italy struck a deal with EU member states to redistribute migrants upon arrival, a voluntary scheme that has not been welcomed by some countries, notably the Visegrad Group.

Last September, the Commission proposed a cross-EU migration pact, which Hungary and Poland have refused to ratify.

In 2016, the EU and Turkey agreed to an arrangement whereby Ankara takes accommodates a large number of migrants but halts onward flows from the Balkans.

As the bloc continues to wrestle with the seemingly intractable problem, EU leaders are scheduled to discuss the issue at their upcoming 24-25 May summit. On the agenda will be Italy’s recent request that the EU offer financial incentives to Libya to curtail the flow of EU-bound, migrant-bearing vessels from its shores.