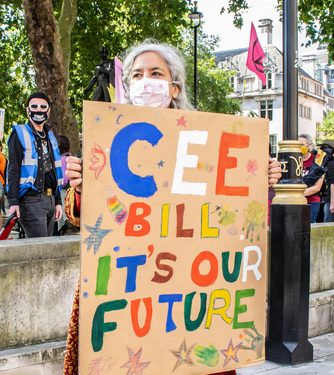 Protesters stressed that the proposed law does not go far enough, as they urged President Emmanuel Macron to do more to limit the expected rise in average global temperature.

The proposed bill is the outcome of France’s experimental citizen climate assembly.

Protests were held in Paris and other large cities. Organisers claimed that approximately 115,000 people participated in more than 160 protests across the country.

A number of NGOs, trade unions and student activist groups took part in the protests.

The lower house of the parliament has passed the climate bill, which, for example, has a provision that shorter domestic flight routes that can be covered readily by train transportation are to be banned.

Macron promised a referendum on environmental reform in his 2017 campaign, but the French weekly Le Journal du Dimanche noted on Sunday that the plan has been scrapped.

Now, as constitutionally required, the bill moves to the upper house of parliament for final approval. However, the upper house is controlled by the Republicans party, which does not support the plan.

Macron insists the plan is not being scrapped and says it “won’t be abandoned”.

He wants to see more ambitious greenhouse gas emission cuts on a par with the EU’s resolve to reduce emissions at least 55% by 2030 compared to 1990 levels. The previous target was set at 40%.

France is looking to use a portion of its coronavirus recovery fund worth some 100 billion euro to fund projects aimed at cutting greenhouse gas emissions and protecting biodiversity.