Squillacciotti’s ‘What has left since we left’: Europe’s last act of love 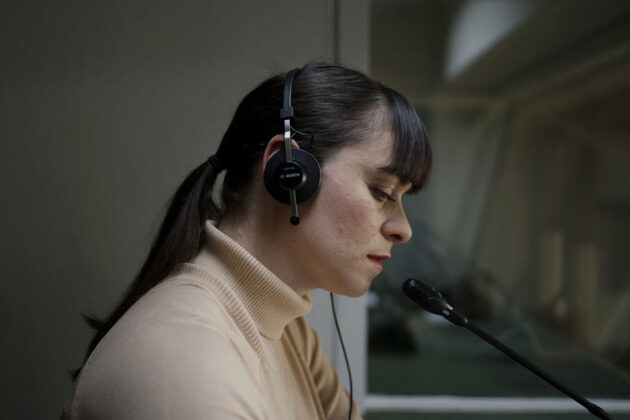 Serena Pacchiani reviews exhibition ‘What has left since we left’, an exploration of language and identity in post-Brexit Europe.

What has left since we left is a composite art project that includes a video installation and a book by the artist and filmmaker Giulio Squillacciotti. It was recently presented as a world premiere at Les Rencontres Internationales Paris/Berlin and in the Whitechapel Gallery. The film is an art project at the contemporary museum GAMeC, in Bergamo, and is on show at Careof, in Milan, until 23 May 2021.

The setting is a sober, elegant and semi-deserted exhibition hall. One of those typically Nordic buildings of timidly deconstructivist architecture that is simultaneously imbued with a sense of controlled and frugal mimicry. Looking at it more closely, comparing it with photographs taken almost 30 years ago, one recognises the headquarters of the Limburg provinciehuis in Maastricht, where on 7 February 1992 twelve countries of the then European Community signed the eponymous treaty.

From the outset, the metaphorical synthesis of the Maastricht Treaty entailed a reference to three fundamental pillars. As a filmaker, Squillacciotti appears to use this architectural reference to these three pillars: human, political and emotional. In his most recent work, What has left since we left, he imagines a ghostly scenario of a Europe in full identity crisis, but at the same time in exhausting search for a renewed and profound existential meaning.

In this crisis, the last three remaining countries of the European Union (Belgium, Holland and Germany) find themselves alone, almost isolated, separated from each other by a linguistic and physical barrier, reminiscent of our current health crisis. The tripling of these national realities is nevertheless embodied by the single actress of the film, Janneke Remmers. One and triune, she jumps from one role to another in a continuous filmic collapse, made up of mechanical montages and a refined vocal and philological choreography. From the director’s control room, entrenched in a glass cockpit, the English translator, played by Anna Brooks-Beckman, tries to interact with and influence the three politicians from an observation point set above everything (and from the “other”).

The work is a reflection on “dialogue”, a theme researched and revisited by this artist on numerous occasions, over and beyond the book that accompanies and completes the film (What has left since we left. Six takes on Europe, published by Onomatopee). The same theme is addressed in his latter installation, Euramis – Friends, Indeed (2019), in which the vocal superimposition of the speeches of three politicians is transformed into an authentic Babel-like trilogy. Configured as an ideal continuation of the work Euramis, What has left since we left is a summa, a Kantian synthesis based on an anthropological model of fluctuation of sense and meaning.

Through the supposedly universal and communal language, English in the current post-Brexit context, what sense of social and linguistic identity defines a European inhabitant and what alternative is likely to be conceivable in the future of a united Europe?

Questioning the meaning of the illusory neutrality of the translation process, Squillacciotti transforms the fictional institutional session into an allegorical intimate dialogue; national and extranational administrative difficulties become an opportunity for further analysis of renewal and cathartic rebirth through reflection and doubling.

The same reflection and doubling that the artist Sophie Calle enacted, mutatis mutandis, in 2007 with the “choral” work Prenez soin de vous (Take care of yourself). Powerless in the face of the farewell letter written by her lover, Calle decides to entrust the interpretation of the possible reaction to one hundred and seven other women, asking them to speak on her behalf. Similarly, in What has left since we left, with due conceptual disparities, Squillacciotti delivers the existential and linguistic discourse to the voices and bodies of the last ghostly European pillars, as if it were a worn-out love story. Taking up the parting words of Calle’s partner, ”it would be the worst kind of masquerade to prolong a situation now when, you know as well as I do, it has become irreparable by the standards of the very love I have for you and the one you have for me”.

On the basis of this presumed and reciprocal feeling of affection that binds peoples and nations together, Squillacciotti’s work probes the roots of the construction of identity through a historical and psychological journey, amidst decomposed expressions and architectures.
An Italian version of this article can be found here.