A second Russian invasion of Ukraine: unlikely but possible

by Martin Sokolov
in Europe 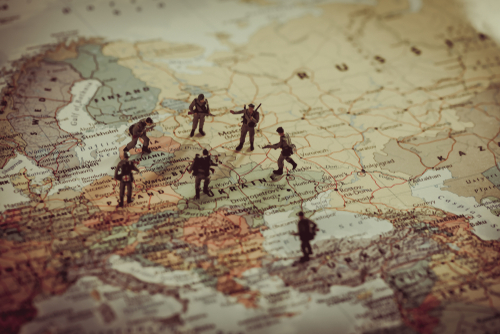 Sofia (Brussels Morning) On 22 April, Russian Defence Minister Sergei Shoigu announced that Russia was withdrawing the troops and equipment it had recently stationed near Ukraine and the illegally annexed Crimean Peninsula. According to the official press release, Russia’s forces have completed their exercise and, therefore, there is no need for them to remain in the area. However, Shoigu’s statement does not clarify how many additional troops were relocated to Crimea in the first place, nor whether all would be pulled back to their permanent bases.

Still, the announced withdrawal considerably deescalates tensions and opens some much-needed room for analysis and reflection. Cautious forms of optimism are nonetheless essential, as the situation is still a powder keg, as it has been since 2014 and will almost certainly remain so.

On 20 April, following a briefing by the Ukrainian foreign minister Kuleba Dmytro, the office of the EU’s top diplomat Josep Borrell said that over 100,000 Russian troops had already been relocated to the Russian-Ukrainian border. Both Washington and NATO cited similar numbers, highlighting that the build-up of Russian forces was greater than prior to the illegal annexation of Crimea in 2014.

Satellite images published by the Wall Street Journal on 20 April showed the extensive presence of Russian military aircraft and other equipment, while on 13 April, Shoigu announced that Moscow was sending 15 naval vessels from its Caspian Flotilla and at least five from its’ Baltic Flotilla.

According to retired USAF General Philip Breedlove, who was Supreme Allied Commander Europe of NATO Allied Command Operations when Russian forces invaded Ukraine in 2014, the satellite images showed that while the Russian units were not poised to strike immediately, Moscow still had multiple military options.

The CIA’s director, William Burns, offered a similar assessment that Moscow was more likely seeking to intimidate as oppose to invade.

Regarding the Russian warships, it was also possible to conclude that as long as they remained in the Sea of Azov, an invasion was unlikely. However, as Paul Goble suggested in an article for the Jamestown Foundation, if the vessels were to be relocated westwards, an imminent large-scale invasion of Ukraine was a plausible scenario.

After the collapse of the Soviet Union, Kiev and Moscow began drifting more and more apart. The Kremlin almost certainly sincerely believes that this is the West’s fault. This rift culminated in 2014 with Russia’s illegal annexation of Crimea and military support for the break-away regions in Eastern Ukraine.

Since then, there has been much talk regarding the need to end the conflict, which objectively benefits neither Kiev nor Moscow in the long term. However, there are several irreconcilable differences between the two parties.

Russia wants, or rather, needs to counter the further enlargement of NATO eastwards, dissuade Ukraine from aligning itself with the West, and have a Russia-friendly government in Kiev, which can ensure the long-term pro-Russian orientation of the country.

Ukraine, per contra, considers NATO enlargement and possible membership as deterrence for further Russian aggression, alignment with the West as a prospect for economic growth, and domestic pro-Russian policies as a threat to national security and sovereignty.

Nevertheless, a large-scale military operation in Ukraine will resolve none of these issues. What is more, it would almost certainly drive Moscow into further international isolation and also terminate projects that Russia deems of strategic importance, such as Nord Stream 2.

That is why it is more likely that the Kremlin is seeking to accomplish two objectives: intimidate and stress-test the new administration of US President Joe Biden; and to distract from the considerable internal challenges, such as the COVID-19 pandemic, low living standard, corruption, President Putin’s approval ratings and domestic support for opposition leader Alexei Navalny.

From any remotely rational standpoint, a Russian large-scale military operation in Ukraine is highly unlikely; however, not all international developments are rational. Additionally, Russia annexed Crimea in an attempt to reassert itself as a regional and global power, protect strategic assets, counter NATO and EU enlargement, and discourage further alignments of post-Soviet states with the West. Not only have almost none of these been achieved but the country has become increasingly isolated and under growing economic sanctions.

To compensate for this failure, the Kremlin has engaged in acts driven by weakness and desperation. These include the attempted murder of Sergey Skripal in 2018, interference in the 2016 US presidential election, the coup plot in Montenegro in 2016, the poisoning of Bulgarian arms dealer Emilian Gebrev in 2015 and involvement in an explosion of the Czech ammunition depot in Vrbětice in 2014, to name a few.

While these events may be regarded by some as elements of a complex hybrid warfare-based engagement by Russia, they are increasingly reminiscent of a much more ad hoc based approach of a country acting out of desperation to be recognised as an important global player. Furthermore, one should not overlook the role of the intelligence services in such a heavily centralised form of governance, in which President Vladimir Putin has a decisive say on all key issues. Authoritarian-leaning administrations tend to promote obedience and loyalty over professionalism and innovation, which inevitably has a trickle-down effect along the chain of command.

Nobody wants to bring bad news to the man in charge, which inadvertently may delude essential information and assessments.

Therefore, it is possible that a contradictory to the rational reading of the situation may end up on President Putin’s desk. This assessment, together with the increasingly risk-prone actions of the Kremlin, illustrate why even the unlikeliest scenario is still a possible aspect of Russia’s approach to the world.

Martin Sokolov is an Associate Fellow at the Centre for National Security and Defence Research at the Bulgarian Academy of Sciences, a former NATO analyst, and co-founder of the Youth Research Centre "Knowledge and Progress."