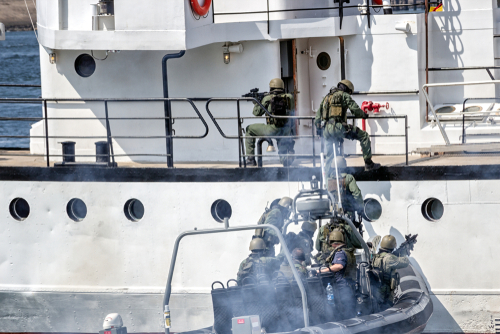 Athens (Brussels Morning) Unmanned vehicles are changing the nature of warfare, threatening to undermine expensive weapon systems that have for decades spearheaded the advantage of ‘Great Powers’ at land and sea, as seen at a leading maritime exhibition this week.

As the Russian fleet mobilises in the Black Sea, maritime security is receiving renewed attention. The introduction of new technologies in maritime warfare could mean that our understanding of what is at play and the relative strength of Russia and the West may be inadequately understood.

Furthermore, the EU is facing an increasing range of challenges not confined to military or national security but for domestic policies as well, with the distinction increasingly blurred.

To address these hybrid challenges, the EU publicised a Maritime Security Strategy in June 2014. It was hailed at the time as an institutional milestone that opened the way for European Defence Agency (EDA) flagship projects showcasing Europe’s ability to project naval power around Europe in the Baltic Sea, Mediterranean, Black Sea and beyond.

Technological advancements in Europe’s maritime defence sector has been showcased this week at the  Ocean 2020 exhibition (21-22 April), highlighting in particular unmanned systems: surveillance, interdiction and underwater.

“The effectiveness of unmanned systems during the latest armed conflicts around the world marks what many consider to be a turning point in modern warfare”, Rear Admiral of the Hellenic Navy Demetrios Tsailas told Brussels Morning.

“Also, the use of Drones included a range of intelligence, surveillance, and reconnaissance operations, as well as unmanned aerial attack operations involving a variety of different platforms and munitions”, he went on.

As maritime security evolves to assimilate relatively low-cost unmanned systems to take advantage of developments in artificial intelligence (AI), competition is fierce for companies and militaries. As such, technology will change the European aeronautics industry and warfare.

“The relatively low cost and high capability of these systems provide smaller states the ability to strengthen our power”, notes Tsailas.

“In countries such as Greece, we must gain autonomy and independence of unmanned systems to improve our access to air and sea power, which in turn has upended existing notions regarding traditional air and sea dominance. The decreased personal risk and stand-off capability have altered the calculus for conflict”, he says.

Competition between EU member states is a sensitive balance, as defence remains a member state competence. Therefore, there is a conscious effort to avoid duplication of national and pan-European capability.

The EDA is developing Unmanned Maritime Systems while France focuses on air jets and Germany on submarines. Post-Brexit, the UK is carving out a distinct trajectory.

However, with smaller US commitment in Europe and the emergence of the EU as a “security provider” in Africa, the Middle East, and Eastern Europe, unmanned aerial technologies acquire new significance in the rebalancing act of Euro-Atlantic partners.