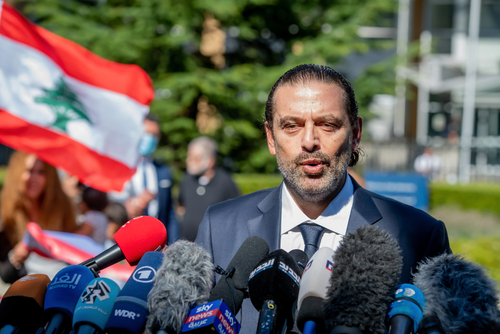 Brussels (Brussels Morning) France and the European Union are reportedly preparing proposals that could lead to asset freezes and travel bans being imposed on Lebanese politicians in a bid to force them to come together and help get their country back on its feet, Reuters reported.

Lebanon’s last government collectively resigned in August following the explosion in Beirut port which leveled several city neighbourhoods, with no new government appointed since, as Lebanon’s politicians remain unable to reach an agreement on the way forward.

Meanwhile, Lebanon is teetering on the brink of bankruptcy, the culmination of decades of patronage, corruption and mismanagement. The country already defaulted on its debt last year, and without a government, it has been impossible for the country to enter into talks with the International Monetary Fund.

After France failed in its attempts to persuade various Lebanese sectarian groups to come together and form a viable government, its diplomats are now proposing the introduction of sanctions against uncooperative senior Lebanese politicians.

“Concrete proposals are being developed against the very people who have abandoned the general interest in favour of their personal interests”, France’s Foreign Minister, Jean-Yves Le Drian, said on Tuesday. “If certain political actors don’t assume their responsibilities, we won’t hesitate to assume ours”, he declared.

According to a senior EU member state diplomat, Le Drian also asked EU High Representative Josep Borrell to work on an options paper, since his staff are investigating how the EU could set up a sanctions regime imposing travel bans and asset freezes. “The French are trying to Europeanise the Lebanon issue. It’s not something they can handle alone – or, at least, their solo efforts haven’t paid off so far”, the diplomat observed.

The measure could prove effective, given that many senior Lebanese politicians have homes, bank accounts and investments in the EU, while their children regularly attend EU universities.
Former Culture Minister Ghassan Salame joined in the call for asset freezes in a column for Le Monde, co-signed by 100 other Lebanese civil society members. “For Lebanese politicians, EU sanctions would have a pragmatic and serious weight because they are often in Europe,” Salame wrote.