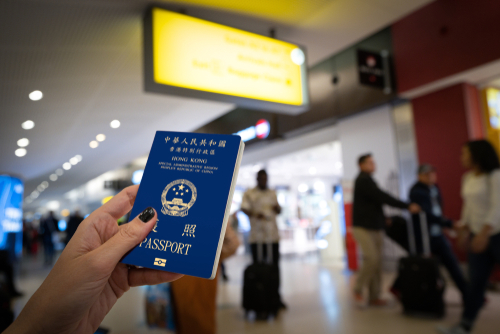 Close up of woman holding a Hong Kong passport over a blurred airport background. Digital composite.

Brussels (Brussels Morning) A letter sent to foreign consulates by the Hong Kong government informs that it no longer recognises the British National (Overseas) passport, a move perceived by some envoys as a diplomatic affront, Reuters reports.

In an unprecedented move, the Hong Kong government demanded that foreign embassies must require Hong Kong-issued passports in their dealings with citizens of the former territory, a move seen as an attempt to persuade countries in general from continuing to recognise the validity of the BN(O) passport, as well.

“Most countries are going to ignore this”,  a Western diplomat said after seeing the letter. “It is the Hong Kong government just trying it on…they have no right to tell any state what foreign passports it can recognise”.

The UK made the BN(O) passport available for HK citizens when the territory was being returned to Chinese rule in 1997. An estimated three million of the city’s 7.4 million citizens either hold or are eligible to hold one.

Since the UK government provided a route for immigration and citizenship to all BN(O) passport-holders from Hong Kong, the authorities there have stopped recognising the passport as a legal identification document.

Some 300,000 to 600,000 Hong Kong residents are expected to make the move to the UK within the next three years, a reaction to increasing pressure from China on the semi-autonomous government of the former territory. One aspect of Beijing’s expanding influence has been the latest electoral law changes that further disenfranchised Hong Kong residents, providing more power to candidates deemed loyal to the Chinese Communist Party.

While HK citizens can still leave the country using their Hong Kong passports, immigration visas are customarily affixed in their BN(O) passports, which suggests that the latest move, most likely the result of pressure from Beijing, is an attempt to force other governments into withdrawing recognition of the document, as well.

Already, the Hong Kong authorities have been pressuring BN(O) passport-holders by denying them pension fund withdrawal payments – a one-time procedure requiring applicants to have proof of permission to permanently emigrate to another country.