Five years later, the question again is who will stand against Le Pen 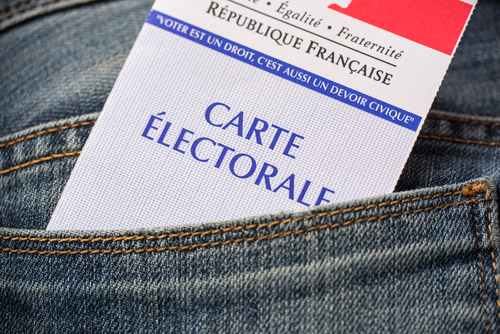 French electoral card in the rear pocket of a jeans

Paris (Brussels Morning) France teeters on the edge of a presidential election period that promises firsts on several counts — the second year into managing the COVID-19 crisis will bring up questions over the pandemic’s management, looming economic crises and a third of the electorate likely showing support for far-right politician Marine Le Pen while a fragmented left and uncertain right call once again for a “blocking vote”.

Political debates have currently been suspended due to COVID-19. The upcoming regional and departmental elections initially planned for March this year have been postponed until June and are now all the more uncertain as numbers show a third wave in the pandemic developing.

Opposition to further postponement is growing as the regional ballot will prove crucial for all political parties to test their strength ahead of 2022. As numbers of the British and South African variants of the virus in the French territory increase exponentially, the government awaits the Scientific Council’s recommendation over whether elections should be held. Those who oppose postponing the ballot until the Autumn perceive this as a pessimistic approach to dealing with the crisis and that democracy cannot be “suspended”.

Those who support moving the elections to a later date, however, maintain that the current conditions favour the outgoing presidents and councils, as they use pandemic strategies for electoral profit. The executive had hoped to avoid a third lockdown but the prospect for one now seems inevitable. More than 21 million people are now in lockdown in 16 departments, including the Paris region and the north, as further extension of restrictions is being considered.

As discussion over the pandemic and vaccination strategies, opinion polls over the last few weeks suggest Macron’s popularity is on the up, faring at 41% according to the Ipsos political barometer —  the highest it has been since March 2020 (44%) when the breakout of COVID-19 rallied a part of the opinion around the president, traditionally the case at times of severe crisis.

A similar picture emerges for Prime Minister Jean Castex (36%) who faces the impossible task of convincing citizens about the necessity and efficiency of renewed measures. At the same time, unfavorable opinion fell several points to 53%.

However, this renewed trust does not translate positively in polls, as Macron lags behind Le Pen for voting intention in the first round. As polls currently stand, he would still win a second mandate, in what seems as the most likely scenario to date. In mid-March, a poll by Ifop conducted for the Marianne magazine, gave Emmanuel Macron and Marine Le Pen, 24% and 28% scores first round, respectively, with the president leading with 53% and 47% of the vote the second round. The same results were presented by a Harris Interactive poll for Commstrat, published by L’Opinion in early March, with a change since January when the leader of the Rassemblement National (RN) was on a par with the president on the first round polls. For Ipsos in January, Le Pen was also leading Macron with 26% over 25%, but the president would win by 56% at the second round. In 2017, Emmanuel Macron gained 24% of the votes in the first round, against 21.3% for Marine Le Pen.

What the majority of polls clearly show is that the progressive powers remain quite fragile against a conservative right that demonstrates an assertive increasing power, mainly thanks to the strategy of de-demonising the contested figure of Marine Le Pen. A striking 48% of the voters think that a Le Pen victory at the election is “probable”, according to the Elabe Institut poll presented by BFMTV. Judged by some voters as “authoritarian” (79%) or “arrogant” (65%), she is also seen by others as “dynamic” (60%), “courageous” (58%) or even “reassuring” (29%).

According to the same poll, 32% of the voters would be ready to vote for RN in the regional elections, while a third of the voters see RN as the main opposition force in the country.

The increasing RN force is also seen as a result of the fragmentation of the conservative political spectrum, and the incapacity of the progressive left to propose a convincing alternative to Emmanuel Macron. While the Republicans (LR) party of former President Nicolas Sarkozy and former Prime Minister and presidential candidate Francois Fillon has not regained its traditional conservative base, potential candidates Xavier Bertrand and Valerie Pecresse have called for a united front against the Macron/Le Pen duo. According to the Ifop and Harris polls, Xavier Bertrand would secure a larger victory against Le Pen at the second round.

Socialist Mayor of Paris Anne Hidalgo launched last week a “reflection platform” ahead of 2022, aiming at uniting the progressive forces and providing an “ecological, social, democratic, republican political offer” against the “chaos” that an eventual RN would lead to. “We must come together, find the taste of being together again”, she told Europe1, without however clarifying whether she will stand candidate for nomination. According to the Ifop poll, Hidalgo would lose by 51-49, edging the margin of error, against Le Pen at a second round.

Furthermore, opinion polls suggest that the “blocking” vote, is now a lot more uncertain. Apart from the absence of leading figures, capable of breaking the Macron/Le Pen dilemma, the political powers and their voters seem divided as to which side they’d chose, were the second round a repeat of the 2017.

“The snake bites its tail”

The intention vote in this case suggests quite a different image from that of 2017, with a significantly higher percentage abstaining or choosing a null/white vote. The same applies when considering a second round with Marine Le Pen facing a right-wing candidate (namely Xavier Bertrand from LR) or Anne Hidalgo from the Socialist Party or Jean-Luc Melenchon (FI). Despite heated exchanges with several ministers, Melenchon secures the backing of some majority figures, including the parliamentary leader of Macron’s movement La Republique En Marche (LREM) who openly defended him as a “republican”.

According to the Ipsos barometer, Macron’s popularity is higher among right-wing voters, which is linked to the fact that recent positions of the majority moved closer to those of the right. The government has recently adopted bills seeking to protect security forces, impose no-meat meals in school canteens or even probing an alleged “Islamo-leftism” in academia, causing the ire of the left. Accusing the president of a dangerous turn against democratic freedoms, they perceive the narrative as nothing less than adopting the same positions as the RN.

For the Green MEP David Cormand, this is leading to the “ultimate triangulation” as he maintains:

“What we are witnessing is a war of positions over where the battlefield will be located. And in this war, LREM is the RN’s objective ally since it wants the same themes. It is the ultimate triangulation that began: in the name of the fight against the RN, we highlight the RN, we choose the themes of the RN and we end up saying the same thing as the RN, while accusing those who would hesitate to block the RN for colluding with the RN”.

Or as Liberation put it, “the snake bites its tail”.