Confiscation and reallocation of mafia assets works in Italy, it can work in Europe too 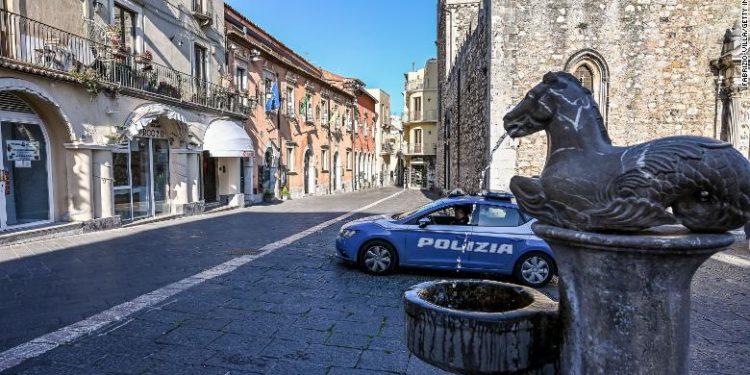 A police car patrols an empty street in Taormina this month after restrictions were imposed to avoid the spread of Covid-19.

Regulations that enable European member states to confiscate mafia assets and reallocate them to the third sector should take hold, writes Sabrina Pignedoli.

Brussels (Brussels Morning) An important element in the fight against mafias is reallocating the confiscated assets of these criminal organisations for projects or initiatives that instead, benefit society.

Management of assets seized in Italy is entrusted to ANBSC (National Agency for the Administration and Destination of Assets Seized and Confiscated from Organised Crime). The work of this agency shows that from the fight against mafias we can derive social utility.

After a recent call by ANSBC, the first one to entrust the confiscated goods — a thousand lots of land throughout Italy — directly to the third sector, an inspection discovered that some of these lots were still in the hands of criminal organisations. Some could not be reallocated others only existed only on land register maps.

Many of the associations that responded to the call, with 160 projects, were disappointed, but I tell them not to be discouraged. We must continue this civic battle with tenacity and not give in to absurdities such as the one in which the SIPPI database — where the assets subject to confiscation are catalogued — does not correspond to the databases to which the local police have access.

In Italy, as in Europe, there is a lot of work to be done but the fruits of our political action are becoming evident. In fact, last December the European regulation 2018/1805 on the mutual recognition of the freezing and confiscation of mafia assets in all European countries came into force.

The regulation is an attack to the heart of organised crime that too often takes dirty money abroad, recycling it into apparently clean investments that are not raising suspicions among local authorities. The Five Star Movement in Brussels had worked hard during the last legislature to improve and strengthen the regulation 2018/1805. Thanks to our amendments and our active contribution, we were able to include Italian preventive measures in the scope of the regulation, focusing on the fact that the amendments fully respected the rights of accused and suspects and had the purpose of removing the assets available to criminal organisations.

This new regulation on the mutual recognition of the freezing and confiscation of mafia property in all the European countries has quickly found a first application: a land of about 4.6 square miles was seized in Zimbor, Romania, in the context of an anti-Camorra operation of the Prosecutor’s office of Salerno.

Finally, an end was put to the shameful tricks of crime bosses whose money laundering by way of investments in other European countries guaranteed them impunity and wealth.

Thanks to this regulation, the fight against the mafia is not hindered by borders and is extended to all Europe.

The next objective will be to extend the process of reallocation to all European countries and for a specific ‘anti-mafia’ legislation in all EU member states, similar to the approaches in Italy. The European Parliament adopted a resolution based on my report, in which the Commission is urged to intervene so that mafia crimes will be recognised in all the member states.

The criminal offense of mafia association must be included in European law with the aim of giving to the judiciary and law enforcement the right tools to fight mafias more effectively. Only in this way our society will be fairer and freer.

Sabrina Pignedoli is an Italian politician and Member of the European Parliament since 2019.