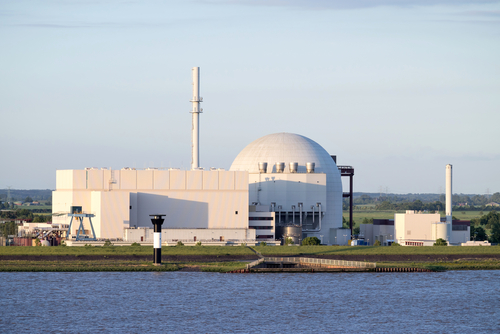 BROKDORF, GERMANY - June 4, 2017: Riverside view of Brokdorf Nuclear Power Plant. It started in October 1986 and the decommissioning is planned for 2021.

Brussels (Brussels Morning) Germany is critical of Poland’s green transition plan, and is stressing the need to adhere to the highest safety standards in nuclear power plants, DW reported on Wednesday.

The German Federal Ministry of the Environment, Nature Conservation and Nuclear Safety has invoked the right of states to voice their concerns over any potential significant impact on their environment.

Poland’s Ministry of Climate and Environment responded by pointing out that environmental impact studies have been carried out.

The German Greens party warned that, according to an expert report it commissioned in January, planned nuclear power plants in Poland posed a significant risk to the population.

German MP Sylvia Kotting-Uhl, chair of the Committee on Environment, Nature Conservation and Nuclear Safety, asserted that, if an accident did happen at the planned plant in Poland, “there is a 20% probability that Germany would be affected.”

In a worst case scenario, evacuation of some 1.8 million Germans would be required, she added.

As part of its move towards carbon neutrality, Poland plans to build six nuclear reactors, which are designed to start operating between 2033 and 2043.

Apart from nuclear, Poland also plans to increase power generation production from wind farms, the first of which is scheduled to begin operations on the Baltic coast in 2025.

Poland currently relies on coal for about 70% of its energy needs and is among the most polluting EU member states. It covers approximately 14% of its power needs from renewable sources, in contrast with the EU average of 20%.

Polish government plans are for coal mining to continue at least until 2050 since it accounts for about 50% of Poland’s energy mix. The government is hesitant to close the mines as more than 100,000 jobs depend on the sector.

Marcin Popkiewicz, nuclear physicist at the University of Warsaw, maintains that “with current technologies, maintains it would not be difficult to raise the share of renewables in the energy mix to 80%.”