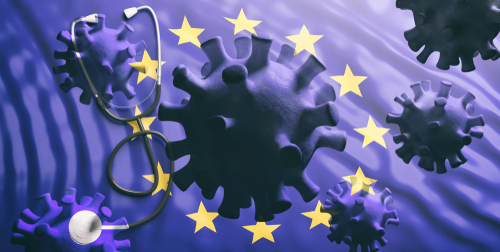 Brussels (Brussels Morning) This week the European Parliament will review the European Commission’s management of COVID-19 vaccines, cast a final vote on Brexit’s trade and cooperation agreement, make an assessment of Europol’s activities and address the environmental issue of “carbon leakage”. Parliamentarians will end the week with preparations for the following week’s plenary session.

On Monday, the Parliament’s Budget Committee will review with the Commission how the EU budget has been used and managed to support the EU’s COVID-19 vaccines strategy. The political debate comes at a sensitive time, just after the EU executive retracted its threat to restrict COVID-19 vaccine exports to Northern Ireland. The proposed move to restrict caused uproar in the UK and dismay in Ireland, and was criticized as “vaccine nationalism” by the World Health Organisation (WHO), which maintains that the vaccination plans should prioritise healthcare professionals and risk groups all over the world.

In particular, the Parliament will scrutinize the Commission’s handling of the 2.7 billion euro Emergency Support Instrument used in 2020 to provide up-front financing as part of Advance Purchase Agreements (APAs) with vaccine manufacturers. Later in the week, on Thursday, MEPs will also debate the issue of access to COVID-19 vaccines with the Commissioner for International Partnerships Jutta Urpilainen.

Still on Monday, the Committee on Economic and Monetary Affairs will vote on the final cooperation and trade agreement between the EU and the UK and Northern Ireland. MEPs will also cast a vote on matters pertaining to security procedures for the exchange and protection of classified information in the context of Brexit negotiations.

On Monday and Tuesday, MEPs and members of EU national parliaments will assess Europol’s activities due to take place next week, in the framework of the Joint Parliamentary Scrutiny Group. The agenda includes thematic debates about the effects of COVID-19 on the EU’s internal security, looking into the role of police cooperation, cybercrime and digital resilience.

Following last week’s announcement by the Commission on a green paper to assess the impact of an ageing population in the EU, the Parliament on Monday will hold a discussion led by MEP Daniel Buda (EPP) on a report about reversing demographic trends in EU regions through the application of cohesion policy instruments.

On Friday, the Environment Committee will address the concept of “carbon leakage” and discuss measures on how to curb it. At stake is a proposal to charge non-EU countries that export goods into the EU with a carbon levy if their climate ambition is not high enough, the aim being to incentivize them while also reducing the risk of “carbon leakage”

The Parliament’s political groups will end their week by discussing the upcoming plenary session (8-11 February), where MEPs will debate and vote on the Recovery and Resilience Facility to help EU countries mitigate the effects and consequences of the COVID-19 pandemic.

In addition, MEPs will debate the European Central Bank’s 2020 annual report with the ECB President Christine Lagarde as well as the democratic scrutiny of social media, and the protection of fundamental rights.