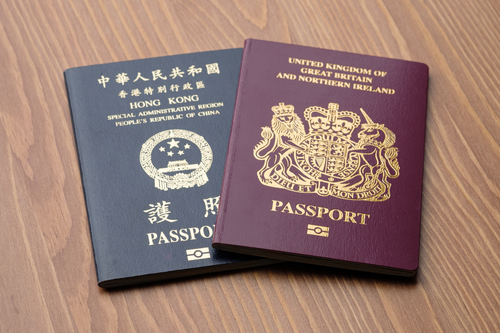 Brussels (Brussels Morning) China announced today that it would no longer recognise the British National Overseas passport as a valid travel document. Beijing was responding to the UK’s plan to allow millions of Hong Kong residents a route to British residency and citizenship, AP reported.

The UK created the plan to provide for up to 5.4 million Hong Kong residents with the right to apply for so-called BNO visas. Such visas would make them eligible to move to the UK, to work and live there for five years, and then to apply for full citizenship.

The demand for such visas exploded after China introduced a new national security law to clamp down on pro-democracy protests in Hong Kong, which remained a separate administrative region with a degree of self-rule after transferring from British to Chinese jurisdiction at the turn of the century.

Even though China committed to maintain its special rights for 50 years after the handover, critics say that Beijing’s pressure on political and civil life in Hong Kong constitutes a clear breach of that commitment. China first declared the 1984 Sino-British declaration on the handover arrangements null and void, then imposed the new national security law on the territory after its legislature failed to pass the measure on its own.

Faced with millions of Hong Kong residents losing their civil rights, and unable to force China to honour its commitments, the UK offered extended rights to BNO visa holders, which would enable the citizens to evade human rights violations by emigrating to Britain.

China’s Foreign Ministry spokesman Zhao Lijian accused the British of attempting to “turn a large number of Hong Kong people into second-class British citizens”. Many residents carry more than one passport, so it is unclear how the Chinese government could prevent people entering the UK with a BNO, though Zhao noted that “China reserves the right to take further measures”. On the UK side, the Foreign Office even introduced a cellphone app to enable applicants to download their biometric information without having to be seen entering the British visa office.