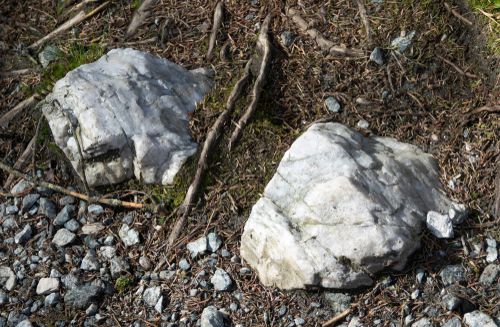 Close-up of quartz core rocks in the norwegian forest

Brussels (Brussels Morning) Norway has discovered a large deposit of rare-earth minerals in the southwest of the country, which could help the EU become less dependent on Russia and China, DW has reported.

The UK-based Norge Mining says it has found phosphate mineral deposits that could produce up to 80 billion tonnes of ore-containing material, which would make it the largest such deposit discovered to date.

Soil samples from the location in Norway also show the presence of titanium and vanadium, with the latter set to become one of the most important elements in the future since some 10% of global production is used to make batteries.

Phosphates are used in the production of fertilizers and titanium is used in the steel industry.

Expected size of the deposit

After conducting electromagnetic field tests in 2019, Norge Mining expected deposits to reach a depth of up to 400 metres, with further studies and test drilling indicating the ore deposits reach more than 2,200 metres deep. According to latest estimates, the depth could reach up to 4,500 metres.

Norge Mining founder Michael Wurmser noted the company has secured six licenses for an area of about 420 square kilometres.

The Geological Survey of Norway estimated the value of the deposit at 30 billion euro in 2012, but the figure was based on the assumption that deposits reached a depth of 100 metres.

The EU is interested in the discovery as phosphate, titanium and vanadium are on the European Commission’s list of critical materials, which the bloc relies on but predominantly imports.

Currently, more than 60% of the EU’s supplies of phosphate, titanium and vanadium come from China, which reserves the right to cut back on rare-earth mineral exports if and when they are needed for domestic production.

In addition to the EU, China has evinced interest in the company. Wurmser noted that state-controlled companies from China have been calling every 10 days or so. He stressed the company is not for sale and in the circumstances sees Chinese companies as no more than potential clients.