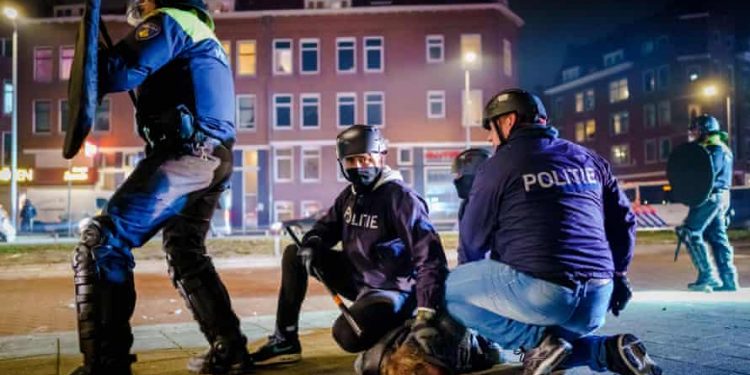 Brussels (Brussels Morning) Dutch police have arrested more than 150 people after the second night of riots in Amersfoort, Amsterdam, Rotterdam and Geleen on Monday, DW reports.

While the motivation behind the riots is not clear, most of those involved were in their teens and twenties.

The Nederlandse Omroep Stichting reported that police in Rotterdam used water cannot following a clashes with rioters, and that Mayor of Rotterdam Ahmed Aboutaleb had issued an emergency decree broadening police powers.

The riots apparently grew out of protests against the curfew imposed to contain the spread of coronavirus. Dutch media have been carrying reports of unnamed individuals using social media in calling for riots.

Authorities imposed the curfew after the National Institute for Public Health and the Environment warned of a new wave of coronavirus infections. The warning came as numbers of new infections were in decline, after weeks of positive epidemiological trends.

The 9 p.m. to 4.30 a.m. curfew is to remain in effect at least until 10 February. Curfew breakers will face fines of 95 euro. Certified exemptions are available for people going to work or having good reason to be out during those hours.

The Netherlands imposed its first curfew since the Second World War in its efforts to cope with the coronavirus pandemic. Authorities ordered the closure of bars and restaurants in October, adding non-essential shops and schools to the list in December.

Commenting on the rioting on Sunday, Dutch Prime Minister Mark Rutte described it as criminal violence and unacceptable behaviour. “All normal people will regard this with horror,” he declared. “What motivated these people has nothing to do with protesting, it’s criminal violence and we will treat it as such.”

Police officials described the unrest on Sunday as the worst rioting in the last 40 years.