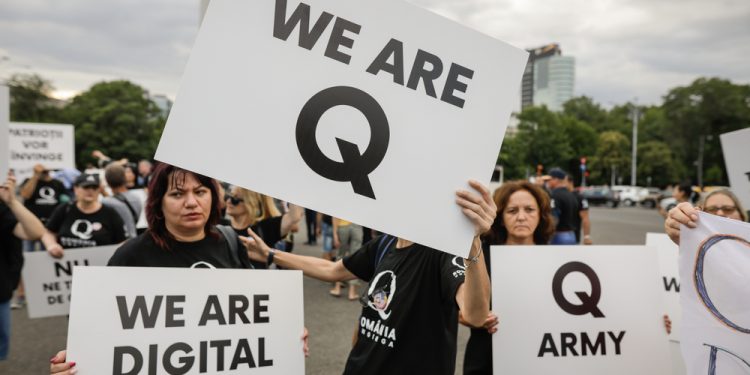 Brussels (Brussels Morning) The QAnon, conspiracy movement whose followers were so prominent among the mob storming the US Capitol on 6 January, has also found very fertile ground in Germany, where many citizens subscribe to the movement’s outlandish conspiracy theory claims, Deutsche Welle reports.

The movement’s followers believe that the US is ruled by a secret cabal of democrats, who influence politics through the “deep state”, and that these cabal members are paedophiles who extract chemicals from children’s brains in order to secure immortality for themselves. Donald Trump, so the theory goes, is the only one who can defeat this cabal, and his every move, however nonsensical it may appear, is part of a clever plan to disrupt the worldwide cabal. Followers wait for “drops” from “Q”, a supposed anonymous source within the intelligence community.

Before 2020, QAnon was a fringe movement in Germany, but the coronavirus pandemic, lockdowns and mask mandate made it significantly more popular, as QAnon movement co-opted conspiracy theories related to the virus. Within a year, the German QAnon movement grew to be the largest non-English speaking offshoot of the original.

The largest German QAnon channel – Qlobal – now has more than 160,000 followers, having grown from a mere  21,000 prior to the pandemic. The Amadeo Antonio Foundation estimates there are at least 150,000 QAnon followers in Germany, with the numbers growing by the day.

Following the storming of the US Capitol, which many German QAnon followers fully supported, authorities are concerned that German copycats might attempt similar actions ahead of Germany’s six state elections and federal general election slated for this year.

Germany’s domestic intelligence service BfV is among the rare law enforcement agencies in the country that acknowledges QAnon followers to be a security risk. Yet the authorities do face significant problems with the group. It is both fractured and diverse and it attracts violent extremists. Additionally, it has acquired a following among people interested in exploring new theories and messages from their homes.