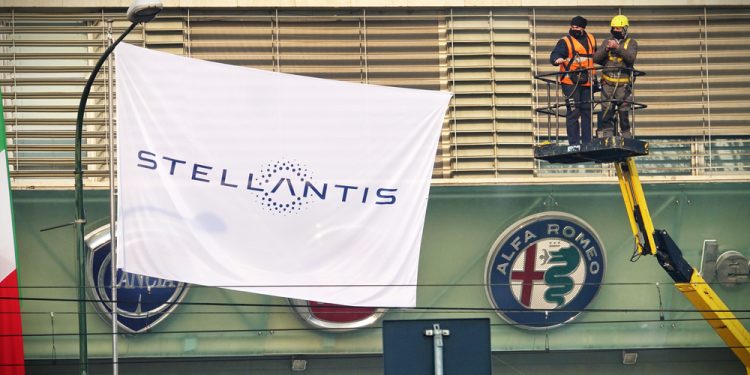 Turin, Italy - January 18, 2021 The Stellantis logo and new flags are installed at Mirafiori. Stellantis was created from the merger of the Fiat Chrysler Automobiles and PSA industrial groups.

Brussels (Brussels Morning) Stellantis, the new European car manufacturing conglomerate, recorded a surge in stock price on its very first day of trading, the merger of Fiat Chrysler and PSA having created a company worth an estimated 42 billion euro, AP reported.

Registered as a corporate entity in the Netherlands to manage the car brands previously owned by the two groups, Stellantis began trading on Monday on the Paris and Milan stock exchanges, and immediately registered an 8.1% increase in stock price, to 13.59 euro per share.

Third largest in the world

The two automotive manufacturing groups entered a 50/50 merger on 4 January, after receiving the green light from the European Commission in December. The new conglomerate will be the third largest car manufacturer in the world by revenue, behind Volkswagen and Toyota, and fourth by production volume, behind Renault-Nissan.

Company chairman John Elkan, heir to the Fiat-founding Agnelli family, said that the new company has “the scale, the resources, the diversity and the knowledge to successfully capture the opportunities of this new era in transportation”. The company has pledged to shift its technologies to electrified powertrains and make greater steps towards autonomous driving.

CEO Carlos Tavares, marking the start of trading, said the merger would add 25 billion euro in value to shareholders over the years, thanks to expected cost cuts. “I can tell you that the focus from day one will be the value creation”, Tavares declared.