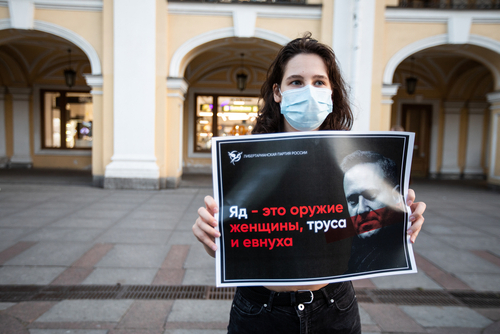 Brussels (Brussels Morning) The European Parliament is calling for the release of Russian opposition leader Alexei Navalny and is demanding harsher sanctions against the Russian Federation as an expression of its outrage at his arrest in Moscow at the weekend.

The EU High Representative Josep Borrell initiated the parliamentary session saying Navalny’s detention was “unacceptable” both to the EU and the international community. “Any further decisions and sanctions are for the Council to take”, Borrell declared.

MEP David McAllister (EPP) said that Navalny’s detention represented a “further deterioration of relations between the EU and Russia”. Calling for a very clear response, the German MEP stated that “politicisation of the Russian judiciary is unacceptable”

McAllister invoked the Magnitsky Act, recently adopted by the EU, in arguing that the EU “should not hesitate to use the human rights sanctions regime tool”.

MEP Sergey Lagodinsky (Greens) maintained that Navalny was being “punished” when he had done “nothing wrong”.

MEPs broadly condemned Russia’s role in arresting the outspoken Kremlin critic who was detained upon arrival at a Moscow airport and has since been placed in thirty-day custody. Several parliamentary interventions were made condemning Nord Stream 2 as a “mistake” and saying that the EU should not support the gas pipeline project.

The Lithuanian MEP Andrius Kubilius (PPE) declared that “if Putin was not afraid of Navalny”, the opposition leader would be free. Kubilius compared the detention to actions by former Belarusian President Lukashenka, who had similarly repressed and silenced any opposition that stood up to the Belarus government.

Navalny, spent the past five months in Berlin recovering from being poisoned in an assault his supporters ascribe to the Kremlin.

Noting her past efforts in defence of Navalny from the time of his arrest and sentencing in 2013, MEP Isabel Santos (S&D) pointed out that “those responsible for his poisoning remain at large.” Detaining him and holding him “in the prison where Magnitsky died” amounted to “a clear affront to the EU and the entire international community”, she said.

“We call upon the Russian authorities to immediately release all those journalists and citizens who have been detained in connection to their reporting of, and support of, Mr Navalny upon his return”, the EU High Representative, Josep Borrell, urged

Earlier, Commission President Ursula von der Leyen condemned the detention of Alexei Navalny yesterday by the Russian authorities, and called upon them to immediately release him and ensure his safety. She also reiterated demands for an independent investigation of “the attack on Alexei Navalny life.”

The Putin government has maintained throughout that it would not open an investigation into the suspected poisoning, claiming there is no evidence to support such an allegation. Moscow has remained adamant on this despite the fact that laboratories in Europe independently verified that Navalny was the victim of an illegal nerve agent, Novichok, produced in Russia.