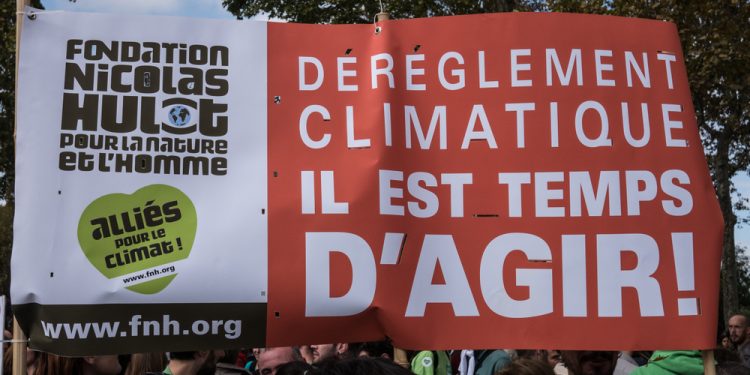 Paris, France – September 2014 – Demonstrators waving signs covered in slogan during the Climate March, event organized in France and countries around the world to protest against the climate change

Brussels (Brussels Morning) The first hearing starts in a Paris court today of a case brought by environmental NGOs against France, accusing the state of failing to stop climate change, according to RFI reporting on Thursday.

The NGOs, including Greenpeace France and Oxfam France, first filed a formal complaint in December 2018, backed by more than two million signatories of an online petition.

The environmental activists want to hold the state responsible for ecological damage, pointing out the ruling could set a precedent and open doors to further pressure on governments.

According to unnamed experts, governments are failing to meet their obligations as outlined in the Paris Agreement of 2016, a failure that has triggered an angry response from the younger generation.

The environmental push in France is part of a global activist movement aimed at using courts against governments. The Dutch Urgenda environmental foundation won against the Netherlands at the Dutch Supreme Court in 2019, when the court ordered the state to cut greenhouse gas emissions at least 25% by 2021 compared to 1990 levels.

In the current case, the NGOs filed a legal complaint in March 2019, unhappy with the response to the earlier formal complaint and seeking symbolic damages of 1 euro.

Greenpeace France director Jean-François Julliard said the court should recognise that the state is not putting enough effort into climate action. “We are full of hope for this hearing and the decision that will follow”, he stated.

The French government rejects the accusations, pointing to regulations adopted in 2019 that set climate goals including carbon neutrality by 2050.

As part of its formal defence, the government argues that the French state should not have to pay compensation for ecological damage as France accounts for about 1% of global greenhouse emissions and cannot be held solely responsible.

Julliard points out a lot is at stake as defeat in court could set a precedent enabling the government to dismiss future pressure from environmental activists.