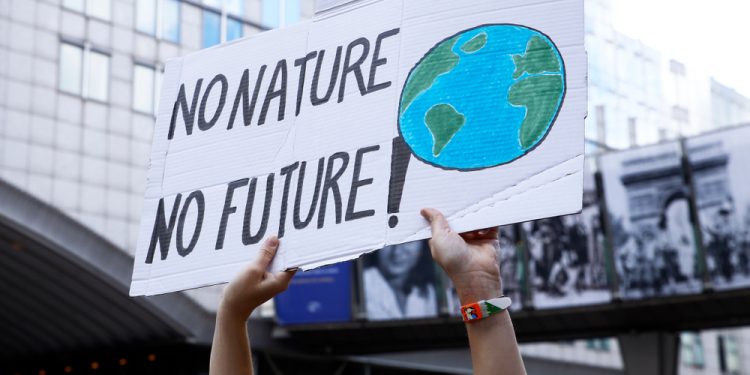 Brussels, Belgium. 8th Sep. 2018.Activists hold placards and chant slogans during a demonstration to demand immediate an action on climate change in front of European Parliament.

Brussels (Brussels Morning) World leaders who attended the One Planet Summit on Monday are hoping their efforts will build fresh momentum to tackle crucial environmental problems such as climate crisis and the loss of biodiversity, dpa reports.

The virtual Summit, a predominantly online event co-hosted by France, the United Nations and the World Bank, was attended by some 30 leaders, government officials and heads of international organisations. During the Summit, France’s President Emmanuel Macron announced that the High Ambition Coalition for Nature and People, a group of countries pledged to protect at least 30% of their territory, has grown to some 50 states.

Macron also announced the results to date of the international fundraising campaign for the Great Green Wall project, which aims to prevent the southern expansion of the Sahara desert by planting trees in the Sahel region. The French president said pledges amounting to one-third of the 10 billion euro estimated cost of the project had been received.

UN Secretary-General Antonio Guterres stressed that the recovery from the global pandemic is “our chance to change course”, calling for smart policies and right investments to chart a path that brings health to all.

Other leaders who attended the Summit included the German Chancellor Angela Merkel, British Prime Minister Boris Johnson and Canadian Prime Minister Justin Trudeau. China was represented by Vice Premier Han Zheng, while a number of other global players were notably  absent, among them Russia, India, Brazil and the current US administration.