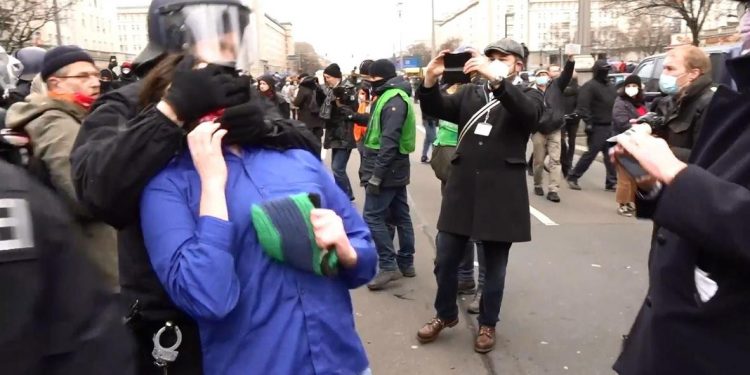 In addition to the prohibited flag, attendants displayed the flags of the far-left German Communist Party (DKP), and the radical left Antifa as well as those of Kurdish and Turkish organisations.

When scuffles broke out, the police made an undisclosed number of arrests, according to local broadcaster rbb.

Marchers headed towards the Lichtenberg district cemetery, where the Left Party traditionally hosts an annual commemoration. Luxemburg and Liebknecht were murdered in January 1919 by the Freikorps paramilitary units supported by then Minister of Defence Gustav Noske of the provisional cabinet headed by Friedrich Ebert of the Social Democratic Party of Germany (SPD).

Lower Saxon authorities noted on Saturday that police are investigating a fire that destroyed vans at the LAB centre in Braunschweig. The LAB centre processes asylum applications and organises accommodation for applicants in Lower Saxony.

Authorities suspect left-wing extremists started the fire since the LAB centre also supports local immigration authorities with deportations. About 50 firemen extinguished the fire on Friday night. Nobody was physically hurt in the incident. The Interior Ministry of Lower Saxony says the value of the destroyed vehicles amounts to 500,000 euro.

Lower Saxony’s Minister for the Interior and Sport, Boris Pistorius of the SPD, stressed that “nobody in Germany has the right to ruthlessly and with sheer force implement their own political goals.” He warned that the far left in Lower Saxony is severely radicalised and claimed it was turning into a terrorist movement.