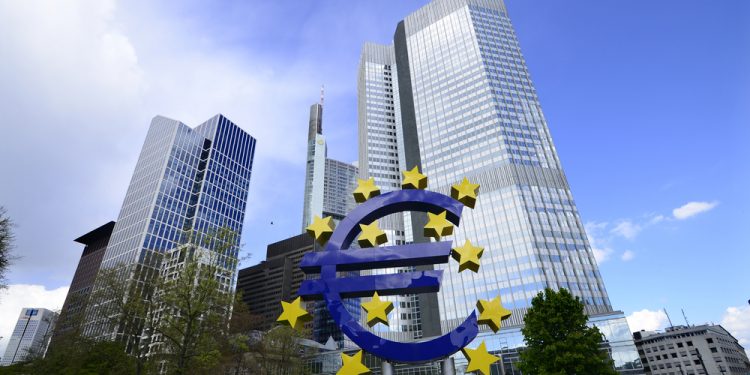 The European Central Bank is the central bank for the euro and administers monetary policy of the eurozone. The headquarter is in Frankfurt, Germany,

Brussels (Brussels Morning) Economic sentiment in the eurozone is up in December accompanied by slightly negative inflation, Reuters reports.

According to the EU Commission’s monthly survey, economic sentiment in the eurozone went up from 87.8 points in November to 90.4 in December, taking it above the expected 90-point mark.

Inflation in line with ECB predictions

Eurostat data released today shows inflation remained at a negative 0.3% in December in the eurozone, which is in line with European Central Bank (ECB) expectations, whereas analysts had predicted negative 0.2%.

Inflation is likely to rise slowly this year as oil prices go up, economic activity begins to recover and authorities reverse some tax measures. The ECB expects inflation to reach 0.3% in the first quarter this year and to stand at 1.5% by the final quarter.

The ECB already approved new stimulus measures in December given that the economy was expected to contract in the final quarter last year, with inflation remaining negative since August. The central bank extended asset buys into 2022 in order to protect the economy from anticipated setbacks caused by the coronavirus crisis.

As EU member states impose lockdowns and close businesses in the services sector in a bid to control the pandemic, the ECB is expected to maintain expansive policies and sustain low borrowing costs in the coming years. This should provide support to the economy, which is struggling under restrictions.

Retail sales down in December

Monthly retail sales in the eurozone dropped 6.1% in December, and 2.9% on the annual level. The monthly decline in France stood at 18% and in Belgium it was 15.9%. Economists who took part in a Reuters survey had predicted retail sales would drop 3.4% compared to November and grow 0.8% compared to December 2019.