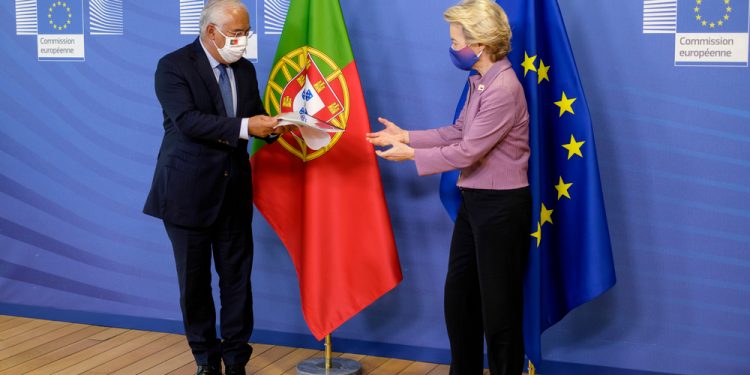 Brussels (Brussels Morning) A visit by the European Council President Charles Michel’s visit to Lisbon kicked off the Portuguese Presidency of the Council of the EU yesterday.

The Belgian politician started his address, noting COVID-19 vaccine deployment across the EU.

“We are fully mobilised with the European Commission, the national governments and local authorities to deploy the [COVID-19] vaccines. We see that it’s a tremendous challenge, that’s why before the end of January we will have another videoconference at the level of heads of state and government to discuss once again how we tackle the COVID-19 crisis and how we deal with this important vaccine roll out”, Michel said in Lisbon yesterday.

The handover of the EU Presidency presented an opportunity for the Portuguese Prime Minister António Costa to evoke the three main priorities of this fourth presidency, the first under the Treaty of Lisbon.

Costa assured that during the Portuguese presidency, implementing the budgetary and financial instruments created by the EU to achieve economic recovery is an absolute priority.

“The European social model is the distinctive aspect of Europe on the world stage. It was decisive in the post-war period of reconstruction. It has been of vital importance in the way that Europe has confronted this COVID-19 pandemic and must constitute a basis of trust, which is indispensable if we are to mobilise society as a whole [for the climate and digital transitions]”, added Prime Minister Costa.

The prime minister went on to underline the importance of guaranteeing European leadership in the twin climate and digital transitions and declared that, during its presidency, Portugal intends to develop, consolidate and implement the European Pillar of Social Rights.

“In particular, my country’s presidency will strive to put the social dimension at the heart of the EU’s policies. The Social Summit will be convened in Porto next year, on 7-8 May, and its chief purpose will be to give a decisive impetus to the implementation of the European Pillar of Social Rights, building on the Action Plan foreseen for early next year”, MEP Manuel Pizarro (S&D) wrote for Brussels Morning.

“The Social Summit will also be the right moment for European leaders to discuss policies such as the Child Guarantee initiative, which the Commission is planning to launch in early 2021, and to progress on the proposal for a directive on adequate minimum wages put forward by Commissioner Nicolas Schmit in October”, Pizarro added.

The Portuguese presidency comes at a particularly challenging time due to health implications and the financial impact of COVID-19, and growing nationalism across the bloc.

The Future of Europe, which was due to take place in 2020, will take now occur in 2021, likely under the helm of the Portuguese EU mandate. The event’s concept is to bring Europeans together, identify challenges and propose solutions for them.

“The Conference on the Future of Europe should enable the active participation of European citizens, especially young people. It should be an inclusive platform, contributing to the development of medium and long-term policies to address current and future challenges”, states the Portuguese presidency’s work programme.

“I’m looking forward to working with you [António Costa}, for the recovery of Europe and the health of our citizens”, expressed von der Leyen on social media.