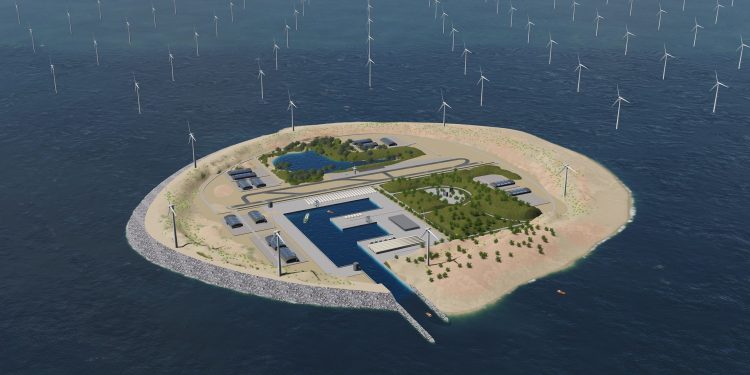 Brussels (Brussels Morning) Denmark has approved plans to build an artificial island for wind energy projects in the North Sea, DW reports. The island will serve as an energy hub, providing power to households and hydrogen for industry, shipping, aviation and heavy transport.

The move is in line with EU’s push towards renewable energy sources and plans to expand offshore wind generation by approximately 25% by 2050.

The artificial island is to be constructed 80 kilometres off the country’s west coast, with an initial size of 120,000 square metres.

The date for the start of construction has yet to be set, with the government planning to build a similar island in the Baltic Sea.

Dan Jørgensen, Minister of Climate and Energy, pointed out the planned energy hub will be the largest construction project in Denmark thus far and “will make a big contribution to the realization of the enormous potential for European offshore wind.”

“Only by inspiring others and developing new green solutions they also want to use, can we really do something to combat climate change,” Jørgensen noted and added that “this is truly a great moment for Denmark and for the global green transition.”

According to plans, the hub should be completed and operational by 2033, with the project’s first phase cost estimated at over 28 billion euro.

Wind farms around the island will have an initial generating capacity of 3 GW. This is expected to reach 10 GW over time. The project is an integral part of Denmark’s plan to lower greenhouse emissions 70% by 2030, compared to 1990 levels.

Denmark was the first country to build an offshore wind farm some 30 years ago and is a pioneer in the use of wind power thanks to favourable prevailing weather conditions.Wind power accounts for approximately 40% of Denmark’s generation. The largest wind turbine maker in the world, Vestas Wind Systems, was founded in Denmark in 1945. Ørsted, Denmark’s largest energy company, is currently the largest offshore wind power developer in the world.