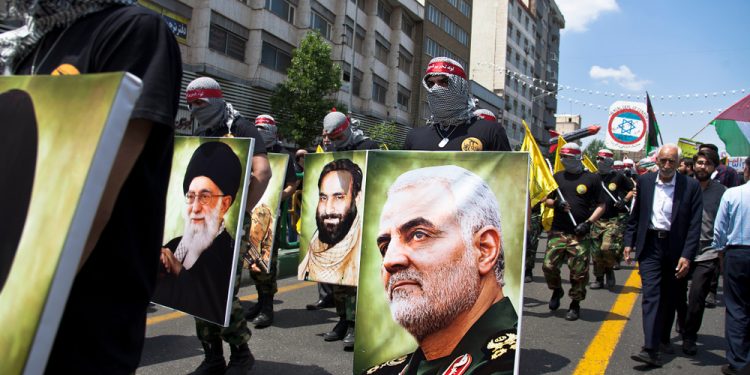 Quds Day rally, Parade of military forces, along with photographs of Qasem Soleimani, Iran Tehran, May 31, 2019

Additional to Germany, the UK and the US, the Iranian media cite Iraq, Jordan, Kuwait, Lebanon, Qatar and Syria of having participated in the assassination, which resulted from a US drone strike during Soleimani’s visit to Baghdad in January last year. ,

Defa Press reports more countries will be added to the list once the investigation into the killing is completed.

On Wednesday, Tehran prosecutor Ali Alqasimehr said the UK-based G4S security firm was involved in the assassination, while the Iranian government says the US used the Ramstein Air Base in Germany to launch the lethal attack against Soleimani.

On Sunday, hundreds of Iraqi mourners marked the first anniversary of Soleimani’s killing with a rally at Baghdad’s central square. Witnesses said the streets leading to the square were crowded since early that morning.

The previous day, the Iraqi Ministry of Interior announced plans for marshalling the protest, deploying security forces and tight controls at the commemoration.

Hossein Salami, commander of the Islamic Revolutionary Guard Corps, vowed there would be retaliation for the assassination. “We would respond with a reciprocal, decisive and strong blow to whatever action the enemy would take against us,” he said.

Esmail Qaani, Soleimani’s successor at the helm of the Quds Force, asserted on Friday that Iran was prepared to avenge the killing.  “From inside your own house, there may emerge, someone who will retaliate for your crime,” he declared. “American mischief will not deter the Quds force from carrying on its resistance path.”On Thursday, Iran’s Foreign Minister Mohammad Javad Zarif accused US President Donald Trump of fabricating a pretext for war after the latter blamed Iran for the rocket attack on the US Embassy in Baghdad on 20 December last year. “Iran doesn’t seek war, but will openly and directly defend its people, security and vital interests,” he warned.