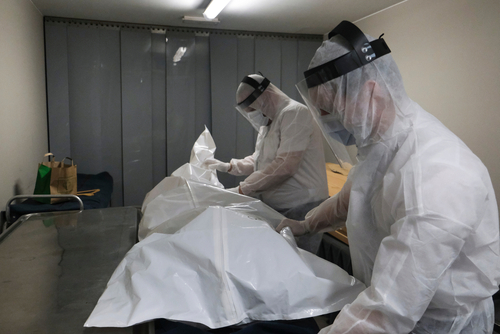 Mortuary workers put the body of a victim of the coronavirus disease inside a coffin at funeral home in Charleroi, Belgium, on April 9, 2020

Brussels (Brussels Morning)In 2021, there were much fewer deaths in Belgium than in the year 2020. In Brussels, there is even a low mortality: there were 135 fewer deaths than expected.

2021 seemed to be going to be a ‘normal’ year in death rates, after the absolute catastrophic year of 2020. With 112,298 deaths, the death rate is only 2.4 percent above the average of just under 110,000 between the years 2017 and 2019, according to the annual data report that the national statistics agency StatBel put online on Friday afternoon.

Brussels is the only region with an under-mortality in 2021. In other words, there were 135 fewer deaths last year than expected in the capital. Brussels has a younger population and is therefore less vulnerable. But the region has long been criticised for a low vaccination rate. So how can that figure be explained?

When the figures are analysed in detail, it becomes clear that the under-mortality in 2021 is due to the first three months of that year, in which there were 11.8% fewer deaths than the average in the years 2017-2019.

“2021 did indeed start with slightly lower death rates than expected,” says VUB demographer Patrick Deboosere in De Morgen . “Remarkably few people died in the spring. Normally the cold months at the beginning of the year are the ones with the highest mortality, but not now.”

“We had just come out of the severe second corona wave, with a series of measures that then also had an effect on the risk of death in general. People were more careful, kept their distance, and wore mouth masks. That meant that there were less flu and fewer colds. The vaccines also did their job with the elders.”

In 2020, Brussels was the region with the highest excess mortality (+22.7%). And if we take stock of the two years of the pandemic, Brussels, along with the province of Liège and Hainaut, remains one of the three areas where the virus has caused the most damage, as reported by BRUZZ.