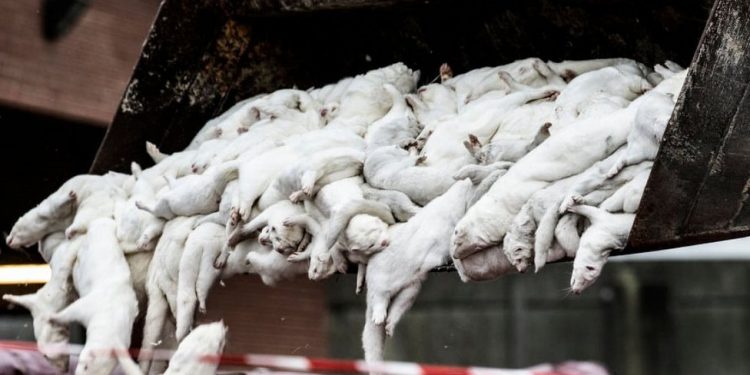 Brussels (Brussels Morning) Danish authorities have ordered the culling of all mink over fears that a mutated form of coronavirus found in the species could interfere with the effectiveness of pending vaccines, BBC reported yesterday, Wednesday.

The Danish Veterinary and Food Administration noted that a cull has been completed on 116 farms, with about 2.85 million animals put down.

As of Tuesday, coronavirus infections were reported on 237 farms and suspected on an additional 33. However, farmers were instructed to cull healthy animals as well. The Danish government decided to cull all the mink last week and the action is expected to take weeks, with police and troops deployed.

Besides Denmark, outbreaks have been reported on farms in Italy, Spain, Sweden, the Netherlands and the US, with the Netherlands scheduled to outlaw mink farming by spring 2021.

The State Serum Institute (SSI) warned about mutations in coronavirus found in mink, after which authorities ordered the mass cull last Wednesday as well as imposing a four-week lockdown in Denmark’s northwest.

SSI chief virologist Anders Fomsgaard pointed out that mutations happen all the time, including in the spike protein, which is the target of some of the vaccines currently being developed. While concerned about mutations that change amino acids and the shape of the spike protein, he stressed that these concerns over vaccines are hypothetical for the time being and that further testing needed.

On Tuesday, Denmark’s Prime Minister Mette Frederiksen declared that the Government lacked the legal backing necessary for calling a nationwide cull and said that the order was a mistake.

Kopenhagen Fur chief Tage Pedersen warned the move would effectively kill the fur industry in Denmark, and predicted that some 6,000 jobs could be lost.

According to Danish health authorities, at least 200 people have contracted coronavirus strains originally found in mink, DW reports. The strains were detected in Spain and the Netherlands as well, where mink on 40 farms were culled during the summer.