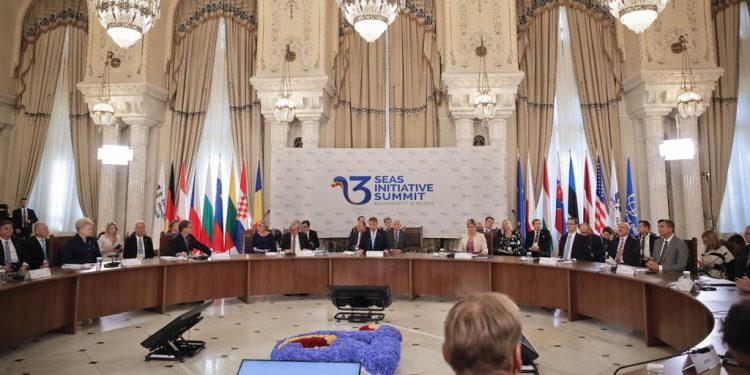 Brussels (Brussels Morning) The US is offering to help the EU Three Seas Initiative, made up of 12 member states between the Adriatic, Baltic and Black seas, strengthen its infrastructure in order to offset China’s growing influence in Europe, DW reported Sunday.

The initiative, launched by Croatia and Poland in 2016, seeks to strengthen cooperation and infrastructure development in the region. Member countries (Austria, Bulgaria, Croatia, Estonia, Hungary, Latvia, Lithuania, Poland, Romania, Slovakia, Slovenia and the Czech Republic), accounting for 28% of EU territory and 22% of the population, contribute 10% of the bloc’s GDP. Development potential is considerable, given the group boasted the highest economic growth in the EU before the coronavirus crisis, approximately 3.5% in contrast with an EU average of 2.1%.

However, development has been sluggish as member states have been slow to subscribe to the fund set up by a Polish and a Romanian bank. In February, US Secretary of State Mike Pompeo pledged US$ 1 billion. Further funding plans will be reviewed at the fifth meeting of the initiative group slated to be held in Tallinn, Estonia, this week.

Polish Undersecretary of State for Economic and Development Cooperation, Africa and the Middle East, Paweł Jabłoński recently noted that the initiative, an overwhelmingly political project, was due to become an economic project. For example, Poland would support building gas pipelines between northern and southern Europe, Jabłoński said, a venture that would make Poland less dependent on Russian gas.

Washington sees this week’s meetings as an opportunity to reduce Beijing’s growing influence in Europe with its 5G Clean Path, one of the reasons Pompeo visited Europe earlier this year. Earlier this month in Slovenia, Pompeo pointed out that the tide was turning against the Chinese Communist Party and its related efforts to control information. Pompeo signed a joint declaration intended to ban Chinese Huawei from doing business in Slovenia.

The head of Warsaw University’s Centre for Europe, Kamil Zajączkowski, noted that China had not played so major a role at the time the initiative was formed. Then, member countries merely wanted to promote joint projects. Since then, the coronavirus crisis had shown how unstable supply chains have become. Zajączkowski observed that political positions, especially towards Russia, are now very different among initiative members, and that joint economic projects constitute the best basis for real cooperation.

US President Donald Trump attended the initiative summit in Warsaw in 2017. Germany’s Minister of Foreign Affairs Heiko Maas applied for German membership the following year at the initiative group summit in Bucharest, Romania.

Washington’s economic interest in the initiative was acknowledged by Poland’s President Andrzej Duda in 2019 when he welcomed the arrival of the first US gas to Poland. US gas is more affordable in Poland than Russian gas and symbolises energy independence from Moscow. In Romania, the US is looking to build nuclear power plants worth US$ 8 billion or to modernize the country’s existing plant.