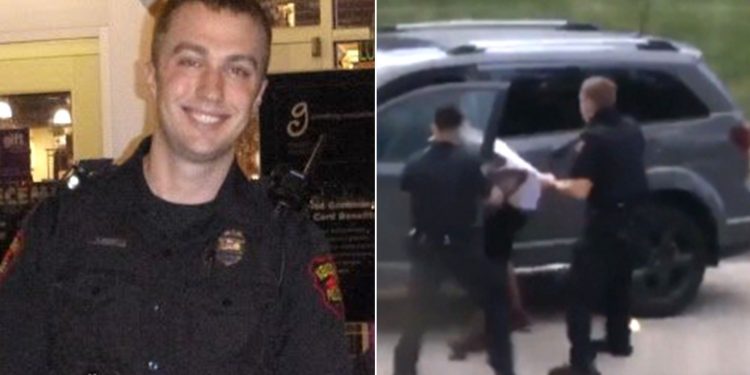 Police in Kenosha, the Wisconsin city rocked by protests and deadly violence since the shooting of Jacob Blake, have named the officer who fired multiple bullets into Blake’s back.

Rusten Sheskey, who has been employed by the Kenosha police department for seven years, was named as the officer caught on video firing seven times into Blake’s back at almost point-blank range as he held him by his shirt.

The shooting of Blake, 29, was seen as the latest incident of the police using potentially lethal force against African Americans amid weeks of Black Lives Matter protests sparked by the issue.

As the US Department of Justice said it was launching a civil rights investigation into the shooting to be led by the FBI, the Wisconsin governor, Tony Evers, authorised the deployment of 500 members of the national guard to Kenosha, doubling the number of troops in the city.

Blake’s shooting, when he was not carrying a weapon at the time or apparently offering any threat to officers, has been contrasted by many to the police response to 17-year-old Kyle Rittenhouse, who is accused of shooting three people – two fatally – at a protest in Kenosha and was seen walking past police vehicles with his weapon and arms raised ignored by officers.

A statement from the Wisconsin Department of Justice identifying Sheskey raised as many questions as it answered, as it said a knife was also recovered from the driver’s side floor of the car where Blake was apparently reaching when he was shot.

“During the incident, officers attempted to arrest Jacob S Blake, age 29. Law enforcement deployed a taser to attempt to stop Mr Blake, however the taser was not successful in stopping Mr Blake.

“During the investigation following the initial incident, Mr Blake admitted that he had a knife in his possession. Division of criminal investigation agents recovered a knife from the driver’s side floorboard of Mr Blake’s vehicle. A search of the vehicle located no additional weapons.”

Among issues that remain unclear is when Blake told officers he had a knife and why police reacted with such force amid what was essentially a domestic incident.

The man who said he made the widely circulated cellphone video of Blake’s shooting has said he heard officers yell: “Drop the knife! Drop the knife!” before the shots were fired. He said he didn’t see a knife in Blake’s hands.

State authorities also did not say that Blake threatened anyone with the knife.

The latest details came as the city of Kenosha, located 40 south of Milwaukee, reeled after three nights of violence and damage, that followed peaceful protests.

Donald Trump has dispatched hundreds of federal agents to the city, and the governor has deployed the state national guard, as violence failed to abate, despite the imposition of a curfew.

With protests elsewhere in America still lingering over the 25 May death of George Floyd, whose neck was pinned to the ground by a Minneapolis police officer, the Kenosha events revived debates about racism in the criminal justice system, casting a shadow over the Republican national convention.

The naming of Sheskey came a few hours after police announced the arrest of a white teenager after two people were shot dead during the third night of protests in Kenosha.

Rittenhouse, 17, of Antioch, Illinois, was taken into custody in Illinois on suspicion of first-degree intentional homicide. Antioch is about 15 miles from Kenosha.

Two men were killed on Tuesday night and a third was wounded in an attack apparently carried out by a young white man who was caught on cellphone video opening fire in the middle of the street with a semi-automatic rifle.

Rittenhouse had allegedly travelled with a weapon to Kenosha after calls on social media for armed vigilantes to protect businesses following the police shooting of Blake.

Following the fatal shootings late on Tuesday night, Wednesday’s protests in Kenosha were smaller and mostly peaceful with both police and the militia members staying away from protesters.

Protesters marched past the intersection where two people were shot on Tuesday night, stopping to gather at the spot where one person was shot, and to pray and lay flowers. Daijon Spann said he decided to join the demonstration because one of those killed the night before was a friend.

Multiple threads on Facebook and Reddit urged militias and other armed people to head to the protests, researchers at the Atlantic Councils Digital Forensic Lab said in a blog post on Wednesday.

The Atlantic Council researchers said that before the attack some of the online discussions encouraged acts of violence while the conspiracy website InfoWars amplified the call to arms, potentially encouraging more armed people to head to Kenosha.

Facebook confirmed on Wednesday that it took down a page called Kenosha Guard for violating its policy against militia organisations.

The company said it also was in the process of removing other accounts and material tied to the shootings that violate its policies, such as for glorifying violence, and it was in contact with local and federal law enforcement on the matter.