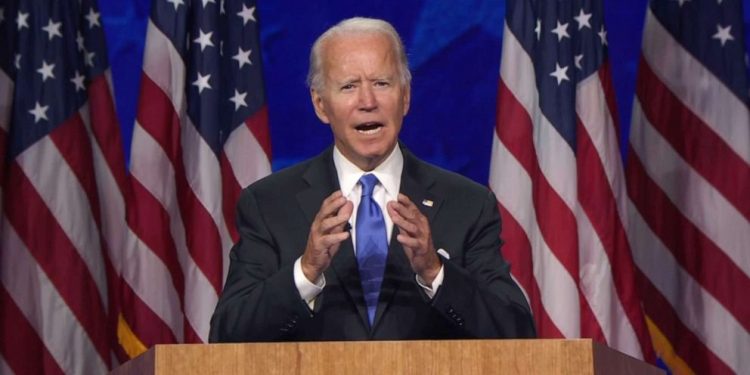 Joe Biden, who will be the oldest US president ever inaugurated if he beats Donald Trump in November, has indicated he could run for a second term.

Biden is 77 but he will be 78 on inauguration day in January. He is running against the current oldest president to take power, who was 70 in January 2017 and is now 74.

Trump has faced questions about his own health and mental ability, but it hasn’t stopped him attacking his challenger on the same grounds.

Asked about such attacks in an ABC interview scheduled for broadcast on Sunday night, Biden said: “Watch me. Mr President, watch me. Look at us both. Look at us both, what we say, what we do, what we control, what we know, what kind of shape we’re in.

Biden has previously challenged Trump to a press-up competition and suggested he would have beaten him up in high school.

ABC released clips of its interview with Biden and Kamala Harris, the 55-year-old California senator who is Biden’s running mate.

Biden has said he sees himself as a transitional figure, leading many to predict he will serve only four years if elected. If he ran and won in 2024 he would be 82 on inauguration day. On handing over power, he would be 86.

“We haven’t spent nearly enough time building the bench in the Democratic party,” Biden told ABC. “…So [what] I want to do is make sure when this is over, we have a new Senate, we won back statehouses, we’re in a position where we transition to a period of bringing people up to the visibility that they need to get to be able to lead nationally. And that’s about raising people up. And that’s what I’m about.”

Also on ABC on Sunday, deputy campaign manager Kate Bedingfield told This Week Biden has not had the coronavirus and “has not been tested”.

“Moving forward,” she said, “should he need to be tested, he would be.”

She also said the campaign had “put in place incredibly strict protocols to ensure that everybody involved who is around Vice-President Biden, who’s around Senator Harris, is undergoing the appropriate testing”.

In the joint interview, Biden was asked about how he would handle the pandemic in office.

“I would shut it down,” he said, asked if he would close the country if necessary. “I would listen to the scientists.

“I will be prepared to do whatever it takes to save lives because we cannot get the country moving until we control the virus. That is the fundamental flaw of this administration’s thinking to begin with. In order to keep the country running and moving and the economy growing, and people employed, you have to fix the virus, you have to deal with the virus.”

Trump responded on Twitter, writing: “Despite biggest ever job gains and a V-shaped recovery, Joe Biden said, ‘I would shut it down’, referring to our country. He has no clue!”

In fact the US economy continues to struggle and this week the number of people applying for unemployment benefits, of down on the dizzying highs of the spring, climbed back over 1 million.

In a separate, solo interview with ABC, Biden was asked about another subject central to the campaign, as protests over police brutality continue: “President Trump says that you want to defund the police. Do you?”

In the joint interview, ABC’s David Muir brought up Trump’s attacks on Harris, which seem in part inspired by her tough questioning of appointees including supreme court justice Brett Kavanaugh during Senate proceedings.

“President Trump has referred to you as ‘nasty’, ‘a sort of madwoman’, ‘a disaster’, ‘the meanest, most horrible, most disrespectful of anybody in the US Senate’. How do you define what you hear from the president?”

Harris laughed, and said: “Listen, I think there is so much about what comes out of Donald Trump’s mouth that is designed to distract the American people from what he is doing every day that is about neglect, negligence and harm to the American people.”

“And no president has said people coming out of fields with torches and spewing antisemitic bile and met by people who oppose them, and someone dies, and he says they’re good people on both sides. No president of the United States has ever said anything like that ever.”

That was a reference to far-right protests in Charlottesville, Virginia, in August 2017, in which a counter-protester, Heather Heyer, was killed. Biden said those events, and Trump’s response, helped inspire his third run for the White House.