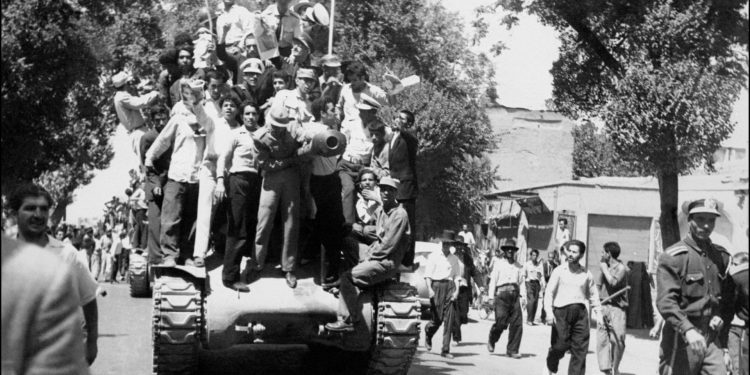 A first-hand account of Britain’s role in the 1953 coup that overthrew the elected prime minister of Iran and restored the shah to power has been published for the first time.

The account by the MI6 officer who ran the operation describes how it took British intelligence years to persuade the US to take part in the coup. Meanwhile, MI6 recruited agents and bribed members of Iran’s parliament with banknotes transported in biscuit tins.

Together the MI6 and CIA even recruited Shah Reza Pahlavi’s sister in an effort to persuade the reluctant monarch to back the coup to overthrow Mohammad Mossadegh.

“The plan would have involved seizure of key points in the city by what units we thought were loyal to the shah … seizure of the radio station etc … the classical plan,” recalled Norman Darbyshire, the head of MI6’s Persia station in Cyprus at the time of the coup.

Britain’s role in a pivotal moment in Iran’s history left an enduring mark on Iranian perceptions of Britain, but details of the role of its spies have remained obscure.

Darbyshire gave his version of events in an off-record interview with the makers of Granada TV’s 1985 film End of Empire: Iran. He refused to appear on camera, so the interview was not used directly in the programme.

The transcript was forgotten until it was rediscovered in the course of research for a new documentary, Coup 53, due to be released on Wednesday, the 67th anniversary of the coup. The role of Darbyshire, who died in 1993, will be dramatised by Ralph Fiennes.

Taghi Amirani, the director of Coup 53, said: “Even though it has been an open secret for decades, the UK government has not officially admitted its fundamental role in the coup. Finding the Darbyshire transcript is like finding the smoking gun. It is a historic discovery.”

The typewritten transcript was published on Monday morning by the National Security Archive at George Washington University in the US.

The shah appointed Mossadegh as prime minister in April 1951 after he won overwhelming support from the Majlis, Iran’s parliament. One of Mossadegh’s first acts was to nationalise the Anglo-Iranian Oil Company (which later became BP), immediately creating a crisis in UK relations.

According to Darbyshire, however, the main reason MI6 wanted to get rid of Mossadegh was that Britain’s spies believed his government, although it contained only one member of the communist Tudeh party, would ultimately be overwhelmed by Soviet influence.

“I really do believe it because Mossadegh was a fairly weak character,” the British intelligence officer said. “[O]nce you get highly trained members of the communist party in, it doesn’t take long. We didn’t share the American view that he was acting as a bulwark against communism … we thought he would be pushed by the communists in the long run.”

In 1951 the UK’s deputy prime minister, Anthony Eden, without consulting his senior officials, dispatched an academic and wartime spy, Robert Zaehner, to try to oust Mossadegh by bribing members of the Majlis and other prominent Iranians.

“Vast sums of money were being spent,” Darbyshire said. “He used to carry biscuit tins with damn great notes. I think he spent well over a million and a half pounds.”

Zaehner’s attempt failed and he left the country, leaving Darbyshire to plot a more violent alternative, which he insisted ended up costing his government less. “The coup cost £700,000. I know because I spent it,” he claimed.

Darbyshire was proud of providing good value for money. At another point in the buildup to the putsch, he boasted he had extracted vital intelligence from an Iranian army commander for two pounds of Lipton tea. “He couldn’t get in Persia and I got it for him and that is precisely what I paid him,” he said.

Darbyshire recruited three brothers from a wealthy anglophile family, the Rashidians, whose task it was to find other conspirators, foment unrest and serve as a conduit to the shah in Tehran.

“They were … intrigued by being in contact with the British and delighted to take our money for something which they believed in themselves. They felt Mossadegh was very much a threat,” Darbyshire said.

“A coup is necessarily predicated on the use of armed force,” Darbyshire said. “Zahedi was suitable as a candidate because he had good standing. We knew the shah trusted him.”

Darbyshire’s plotting was interrupted in October 1952 when Mossadegh severed relations with the UK and expelled its diplomats and spies. Darbyshire left with his coup plans in his pocket and presented them to the CIA in Beirut.

But the CIA was not yet interested, and the MI6 leadership was not prepared to move without the Americans, rather to Darbyshire’s disdain.

“In the early months of 53 we were building up with the Rashidians and we thought we had enough military units to mount something, but London started getting cold feet,” he told his interviewer, adding acerbically: “Unfortunately, the head of SIS at the time, General [John] Sinclair knew about as much of the Middle East as a 10-year-old (far more interested in cricket anyway).”

The US position only changed after Dwight Eisenhower took office in January 1953. The challenge then was to persuade the young, inexperienced and nervous shah to join the conspiracy. Unless he was ready to sign decrees dismissing Mossadegh and appointing Zahedi, the coup would come to nothing.

In an effort to persuade the shah, Darbyshire and his CIA counterpart, Stephen Meade, went to Paris to see his sister, Ashraf, to talk her into flying to Tehran and assuring her brother that the US and UK were serious about the plot.

“We made it clear that we would pay expenses, and when I produced a great wad of notes her eyes alighted and she said she would just have to go to Nice for a week to clear things up,” Darbyshire said. “She was quite a flighty woman and Steve, who fancied anything, fancied her.”

Darbyshire admitted he organised the abduction of Mossadegh’s chief of police, General Mahmoud Afshartous, in April 1953, but insisted it was never intended that he be killed – a murder that fuelled the instability leading up to the coup

“Something went wrong: he was kidnapped and held in a cave,” he said. “Feelings ran very high and Afshartous was unwise enough to make derogatory comments about the shah. He was under guard by a young army officer and the young officer pulled out a gun and shot him. That was never part of our programme at all but that’s how it happened.”

After a few false starts, the coup succeeded on 19 August 1953. Mossadegh was put on trial and kept under house arrest until his death 14 years later. According to Darbyshire, his fate was sealed from the moment he took office.

“They would have wanted to oust Mossadegh regardless of whether he would have signed an agreement favourable to the British,” he said “Eventually they would have been forced to have considered getting rid of him to prevent a Russian takeover. I am convinced that was on the cards.”