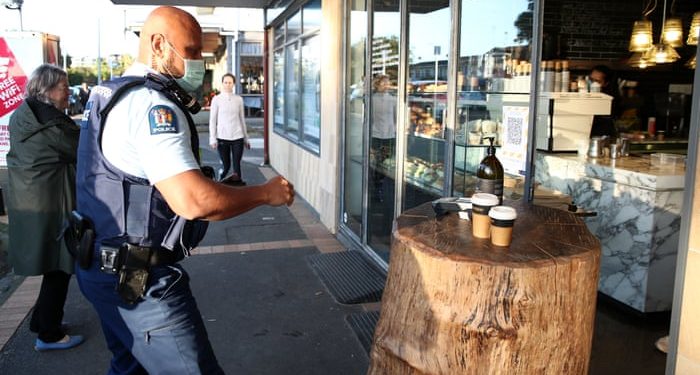 Covid-19 may have been circulating in New Zealand’s biggest city for weeks, the country’s top health official has said, as 13 new community cases were confirmed – all linked to the four cases announced on Tuesday.

The prime minister, Jacinda Ardern, said the growing cluster in Auckland, now totalling 17, “would get worse before it gets better” in the city of more than 1.4 million people.

New Zealanders have been shocked by the return of the virus after 102 days without community transmission, having become renowned around the world for the country’s successful Covid-19 elimination strategy.

“Once again we are reminded of how tricky this virus is and how easily it can spread,” Ardern said. “Going hard and early is still the best course of action.”

The prospect of a long level 3 lockdown in the city is becoming ever more likely. A decision is expected on Friday. Auckland is nearing the end of an initital three-day level 3 lockdown in which people are advised to stay at home unless they need to travel for work, or they are shopping or exercising. All schools and childcare centres, and non-essential businesses have closed.

Thirty-six cases are now active in the country, including those in managed quarantine facilities. One of the new cases announced on Thursday was at the Mount Albert grammar school in Auckland, and was confirmed to be a relative of someone in the initial outbreak. The infected student attended class on Monday, and local health authorities said they were contacting and isolating around 100 close contacts they had while at school.

“As we all learnt from our first experience with Covid, once you identify a cluster, it grows before it slows. We should expect that to be the case here,” Ardern told a media briefing in Wellington. “We can see the seriousness of the situation we are in. It’s being dealt with in an urgent but calm and methodical way.”

Dr Ashley Bloomfield, the director-general of health, said all active cases would now be required to enter government-managed quarantine, in a departure from a previous policy which had allowed infected people to self-isolate at home, or be admitted to hospital if they were severely ill.

Bloomfield said despite people’s best intentions many were visited by friends and family when they fell ill, and placing infected people in mandatory quarantine was the country’s best bet at containing the spread. He admitted some Covid-19 patients had resisted the new measure.

Bloomfield said isolation and testing of any close or casual contacts to positive cases was the primary response to the outbreak, as was tracing the original source, which remained elusive a day after New Zealand’s largest city entered level 3 lockdown.

Genome sequencing was “well underway” on the original four cases, to trace the train of transmission, but Bloomfield confirmed the virus may have been circulating in Auckland for several weeks as the original case started displaying symptoms as early as 31 July.

“We will find the source, I have no doubt about that.” Bloomfield said.

One of the infected people worked in an Auckland cool store, and it was being explored whether the virus entered the country on imported freight, though Bloomfield stressed this scenario was “very unlikely”. The cool store had been swabbed to rule it out as a source of infection.

New Zealand health officials say it’s only a matter of time before they solve the mystery outbreak. Outside of Auckland the rest of the country has had its alert level raised from 1 to 2.

Experts agreed that until the original source of the virus is identified, Auckland’s lockdown would likely be extended past the midnight Friday deadline.

A protest against lockdown measures was held in the Northland city of Whangarei on Thursday, but police said they encountered little resistance to the measures in Auckland itself.

The contact tracing, isolation and testing process has been identified as crucial in New Zealand which, unlike other countries, has pursued an elimination strategy of the virus.

It proved successful back in autumn when a 51-day lockdown eradicated the virus from the community and allowed Kiwis to return to their normal lives, aside from strict border controls.

The new outbreak has returned New Zealanders to a lockdown tradition: waiting for Ardern’s daily 1pm press conference to learn the numbers of new cases.

When the cabinet meets on Friday it must also consider whether to postpone a national election slated for 19 September.

The finance minister, Grant Robertson, said the government would also look at further economic assistance for affected individuals and businesses as needed.

On Thursday morning, lines at testing facilities began before dawn, with waits expected to be up to six hours in some cases. Panic buying of basic food-stuffs continued, and supermarkets have now issued buying limits on some items.

The police commissioner, Andrew Coster, said most Aucklanders were complying well with the lockdown rules, though some had tried to flee the city for holiday homes on the coast.