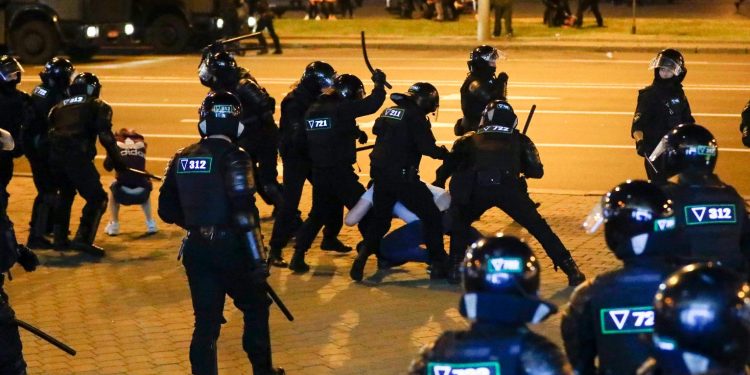 Belarus has confirmed that a young man has died in police custody, the second death since mass protests began on Sunday against the country’s leader, Alexander Lukashenko.

Alexander Vikhor, 25, died after being detained on Sunday in the city of Gomel in south-east Belarus during countrywide protests over accusations of mass vote-rigging in presidential elections. Protests continued for a fourth night on Wednesday.

His mother told the RFE/RL news service in Belarusia that her son had heart problems and was held alone in a police van for hours as his condition worsened.

“He screamed, asked them for help … and the police took him for a crazy person and drove him to the psychiatric hospital,” she said. She suspected that he had been beaten.

Opposition members have accused police of attacking protesters with impunity. Video showed police officers shooting passersby with rubber bullets and beating demonstrators with truncheons after their arrest. Police in Brest said that they had opened fire using live ammunition on protesters who had attacked them with metal clubs.

The first fatality was confirmed on Monday when police said a man died after an explosive device went off in his hand. Opposition supporters have blamed police for his death and found videos that appear to show police opening fire as he collapses in the street. On Tuesday, people laying flowers and white ribbon at the spot in Minsk where he died were allegedly targeted by riot police.

More than 6,000 people had been detained as of Wednesday morning, according to Belarusian authorities. Hundreds have been injured, as police have broken up demonstrations using truncheons, rubber bullets, and stun grenades. The protests, which have taken place nightly in more than 30 cities around the country, are the largest since Lukashenko took power in 1994.

At a detention centre on the outskirts of the capital, Minsk, desperate families have gathered each morning, begging police for information on relatives who have gone missing at the protests.

Vikhor’s mother said police had refused to give her information about what had happened to him.

“I searched for him for all these days,” she said. “They didn’t give me information about him. Today they wrote me that Sasha is in the morgue.”

Belarus’s investigative committee confirmed the death in a press release and claimed that he had been arrested for taking part in the protests. His mother denied that he was a protester and said he had gone to visit a girlfriend on Sunday when he was detained.