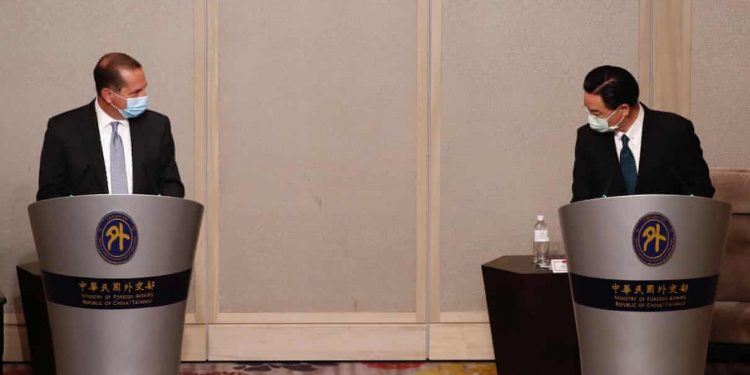 China is trying to turn Taiwan into another Hong Kong, the island’s foreign minister warned on Tuesday as he met with a senior US official making a historic diplomatic trip.

A crackdown on dissent in Hong Kong has gathered pace since China imposed a sweeping security law on the financial hub in June, with opposition politicians disqualified and activists arrested.

The security clampdown has caused alarm in Taiwan, a self-ruled island of 23 million people that Beijing claims as its own territory and has vowed to one day seize, by force if necessary.

During a rare meeting with US health secretary Alex Azar in Taipei on Tuesday, foreign minister Joseph Wu said Taiwan lived under the constant threat of having its freedoms taken away by China.

“Our daily lives have become increasingly difficult as China continues to pressure Taiwan into accepting its political conditions, conditions that will turn Taiwan into the next Hong Kong,” he said.

Azar is in Taipei for a three-day visit billed as the highest level visit from the United States since it switched diplomatic recognition from the island to China in 1979.

His trip comes as relations between the US and China are in tumult, with the two sides clashing over a wide range of trade, military and security issues, as well as the coronavirus pandemic.

During his visit Azar has heaped praise on Taiwan’s democracy and its success in battling the coronavirus.

He has previously criticised Beijing’s handling of the pandemic, which emerged in central China, and its authoritarian model of government.