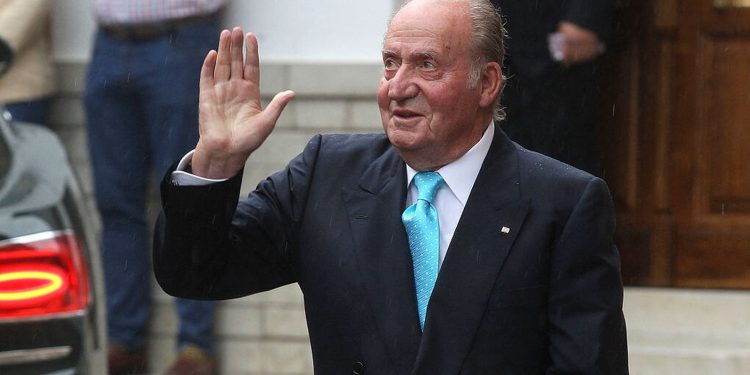 At first it was Portugal, then the Dominican Republic, but now Abu Dhabi is firming as the most likely place of residence for Spain’s scandal-hit former king Juan Carlos.

On Saturday, Spain’s NIUS media group published an image that showed a man with at least the likeness of Juan Carlos in a face mask, descending from a plane.

The image builds on a report a day earlier by Spain’s pro-monarchy ABC newspaper, which said he has been staying in a presidential suite at the Emirates palace hotel since leaving his country aboard a private jet on Monday.

Speculation about his whereabouts has been rife since Monday, when Spain’s royal house published a letter sent by Juan Carlos to his son, King Felipe VI, saying he would “move, at this time, outside of Spain” following a series of damaging allegations about his financial arrangements that have harmed the reputation of the monarchy.

Soon after the announcement, media in Portugal reported that he was in the Portuguese riviera, where Juan Carlos, who was born in exile in Rome, had spent part of his childhood.

On Friday, ABC said a private plane en route from Paris to Abu Dhabi stopped off in the north-western Spanish city of Vigo to pick up Juan Carlos, four security guards and one other person on Monday morning.

Upon arrival at Abu Dhabi’s al Bateen airport after a seven-hour flight, it said the former king and his entourage were flown by helicopter to the government-owned Emirates palace hotel. He is said to have settled in the suite, which can fetch €11,000 ($12,800) a night. Whether it is merely a stopover or a more permanent place to stay is unclear.

In March, Felipe stripped Juan Carlos of his annual stipend and renounced his own personal inheritance from the 82-year-old king emeritus, as he is now known in Spain, after reports that he was in line to receive millions of euros from a secret offshore fund with ties to Saudi Arabia.

Three months later, Spain’s supreme court launched an investigation into the former king’s role in a deal in which a Spanish consortium landed a €6.7bn (£5.9bn) contract to build a high-speed rail line between the Saudi cities of Medina and Mecca.

Juan Carlos played a pivotal role in restoring democracy to Spain following the death of General Francisco Franco in 1975, not least when he stood firm in the face of an attempted military coup in 1981.

But in recent years the revelations about his private life and financial affairs have tarnished what was once seen as one of Europe’s model monarchies.

The former monarch is not formally under investigation and has repeatedly declined to comment on the allegations. Juan Carlos has however expressed his willingness to remain at the disposition of judicial authorities while outside Spain.

His lawyer, the royal palace and the government have all declined to say where Juan Carlos is. United Arab Emirates officials and the Emirates palace hotel did not respond to requests for comment.

Spain and Abu Dhabi have an extradition agreement, signed by Juan Carlos himself in 2010.