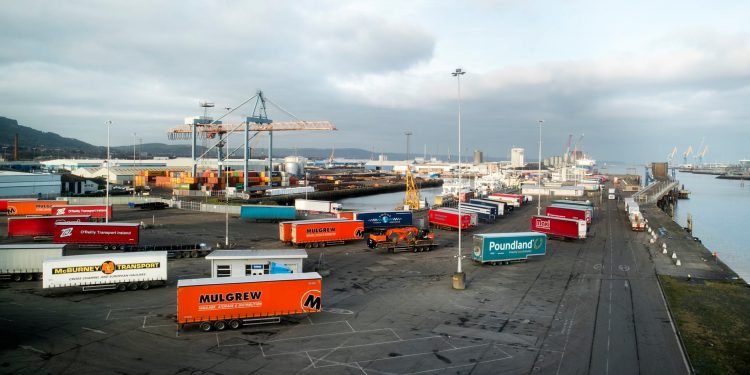 The UK government has announced a £355m package to cushion Northern Ireland businesses from the costs of trading with the rest of the UK because of Brexit.

Michael Gove, the Cabinet Office minister, said on Friday £200m would be spent on a trader support service (TSS) to help firms handle new bureaucracy to move goods across the Irish Sea, turning the government into a de facto customs agent for traders.

A further £155m will be spent on digital technology to streamline processes required by the new internal border created by the Northern Irish protocol, part of the Brexit deal that aligns the region to the UK customs territory and the EU customs code.

It means all businesses sending goods to the region from Great Britain will have to make formal declarations for the first time.

First details of the new trading conditions across the Irish Sea emerged last month, with businesses obliged to complete customs, security and transit forms on all goods being transported to Northern Ireland.

Boris Johnson, the prime minister, was accused of misleading the public about the Brexit deal last November after footage emerged of him telling exporters in Northern Ireland they would not need to fill in extra paperwork. Downing Street continues to insist Northern Ireland will have unfettered access to markets in Great Britain.

Gove, who is to visit Belfast on Friday, will also announce £300m in funding for the Peace Plus programme, which promotes peace, prosperity and reconciliation on the island of Ireland.

“Today’s £650m investment underlines our absolute commitment to the people and businesses of Northern Ireland as we move towards the end of the transition period.”

Gove, who as chancellor of the Duchy of Lancaster is de facto deputy prime minister, added: “As we continue to engage with businesses, and our discussions with the EU proceed, we will update these resources to ensure that traders are ready for the end of the transition period.”

The trader support scheme, which is to start next month, will give free advice to companies and complete import declarations on their behalf, passing the administrative burden to officials and the taxpayer.

Business leaders welcomed the supports as significant but said more help would be needed.

“We’ve consistently said for a long time that the government should help with the cost of transition, because we’re facing the biggest change in how we move goods between GB and Northern Ireland in a lifetime and the burden of that shouldn’t fall on the shoulders on businesses here,” Seamus Leheny ,of the Freight Transport Association, told the BBC.

Aodhán Connolly, the director of the Northern Ireland Retail Consortium, said the supports would help ease trade frictions but said the timeline was ambitious, details remained unclear and funding would need to be replenished. “This is finite. What happens when the money runs out?”