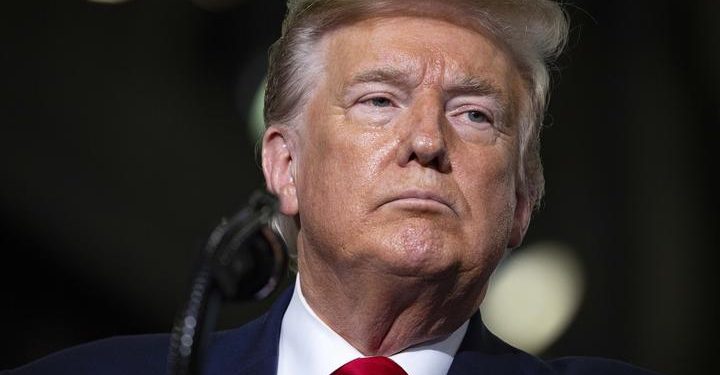 Donald Trump on Wednesday repeated that he believes coronavirus will “go away”, despite his top public health expert warning that it could take most of 2021 or longer to get the pandemic under control and that it is “unlikely” the virus can ever be eradicated.

At a White House briefing, the US president said of Covid-19: “It’s going away, it will go away, things go away, absolutely. No question in my mind, sooner rather than later.”

Trump has made numerous versions of this assertion over the more than six months that the US has been battling the outbreak, despite vast evidence otherwise and frequent contradictions from public health leaders.

On Wednesday the US had 4.8 million recorded cases of coronavirus and has witnessed 157,690 deaths from the disease, according to Johns Hopkins University data. Public health experts in the last few days have praised a gradual decline in new cases in some states that were badly hit while warning that nationwide the pandemic was in a worrying “new phase”.

The White House coronavirus task force coordinator, Deborah Birx, has said that the disease has become “extraordinarily widespread” in the US.

And on Wednesday, Anthony Fauci, the director of the National Institute of Allergy and Infectious Diseases and the most senior public health official on the taskforce, said: “I don’t think we’re going to eradicate this from the planet … because it’s such a highly transmissible virus that that seems unlikely.”

And despite Trump claiming in an interview with Axios released on Monday that coronavirus is under control in the US, Fauci on Wednesday spoke of a much longer timescale to achieve that.

“I hope and feel it’s possible that by the time we get through 2021 and go around for another cycle, that we’ll have this under control … Do I think we’re going to have a much, much better control one full year from this winter? I think so,” Fauci said in an interview with Reuters.

Fauci said he was cautiously optimistic about US progress toward developing a successful and safe vaccine and achieving mass distribution next year.

“Historically, if you get a vaccine that has a moderate to high degree of efficacy, and you combine with that prudent public health measures, we can put this behind us,” he said.

He added: “We may need to go through a season of it, and then by the next season if we have a vaccine it won’t be a pandemic, it won’t be immobilizing the world, it won’t be destroying the economy.”

In the president’s daily briefing, which he now delivers without top health experts beside him, Trump followed up on a visit to the White House earlier in the day by the governor of Arizona, Doug Ducey, praising the state’s handling of coronavirus despite a deadly surge of infections after a rush to reopen for business.

Trump said Ducey “has really done a fantastic job” and his state was an example of “such a successful endeavor”.

In fact, Arizona become one of several states that saw a sharp surge in new coronavirus cases and deaths in late May and early June after lifting restrictions – without following guidelines put out by federal public health experts about sustained declining cases, social distancing and mask-wearing.

Arizona was seeing an alarming surge in coronavirus cases in early June, with more than 1,000 new infections per day and acute pressure on hospitals, prompting state politicians to criticize Ducey for failing to highlight the “seriousness” of the situation.

The number of new cases is now coming down from that surge after the state in late June was forced to shut back down facilities such as bars, movie theaters, gyms and water parks.

As of Wednesday, the state had a documented total of 182,203 Covid-19 infections and had suffered 3,932 fatalities, according to its department of health services.

Meanwhile, the president on Wednesday floated the idea of using executive orders to break the impasse in Congress over enhanced unemployment benefits and eviction protections, raising immediate questions over the constitutionality of such a move.

“My administration is exploring executive actions to provide protection against eviction … additional relief to those who are unemployed, and a term-limited suspension of the payroll tax,” Trump said at the briefing.

Congress is the branch of the US government that appropriates funds; the president can influence budgetary negotiations, but cannot draft legislation.

Trump’s chief of staff, Mark Meadows, has argued that the administration can repurpose money that was appropriated by Congress. Such action would almost certainly draw legal challenges, according to Politico.

And, challenged on his assertion that US schools should reopen fully after the summer break because children are “virtually immune” to coronavirus, Trump said at the briefing that he was “talking about them not getting very sick.”

In fact, children can catch, pass on and die from Covid-19.