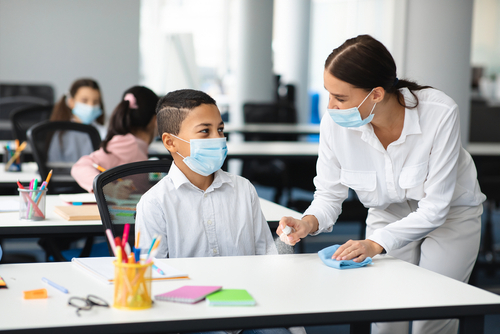 Brussels (Brussels Morning) Nineteen schools from Flanders and Brussels have already reported to the Flemish government that they are temporarily closing, and there will be more in the coming days and weeks, mostly due to staff shortages. Inspectors of the Education Inspectorate will therefore have the opportunity in the coming weeks to jump into the breach to help schools with many teachers in quarantine. Flemish Minister of Education Ben Weyts (N-VA) reports this on Wednesday.

Scheduled screenings are temporarily suspended, unless a school expressly requests to be screened. “We don’t solve all problems with this, but it is a nice gesture from the Education Inspectorate,” says Weyts in a report by BRUZZ. “It really is all hands on deck. Our inspectors are people with a lot of practical experience who can be deployed widely.”

The schools will receive extra resources and possibilities to bring in extra people, now that many teachers have to quarantine again due to the fifth corona wave, but it is often difficult to find suitable people. “At the height of the fourth wave, there were about 150 schools that had to close completely. We know that a lot of schools will also get into trouble in this fifth wave. The Education Inspectorate is now doing what it can to help,” said Weyts.

In normal times, the 150 staff members of the Education Inspectorate have a versatile range of tasks. They carry out audits at schools, carry out checks in, among other things, boarding schools and home education, conduct research and issue advice on, for example, new curricula or schools. But since the start of the corona crisis, the Education Inspectorate has thoroughly adapted its own functioning and has focused on supporting schools in several periods.

The Inspectorate will again contact all schools in the coming weeks and offer to enter into discussions. If schools so request, an education inspector can also fill in on the classroom floor himself, if desired. “Each inspector has years of experience as a teacher. They have the necessary baggage to jump in for a few days, for example. The offer is non-binding and not mandatory. The school and the inspector can make concrete agreements themselves,” says Weyts.