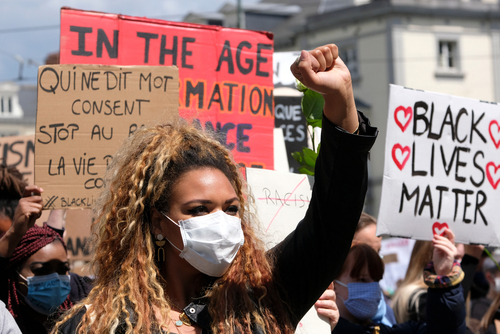 Protesters raise their fist during during an anti-racism protest against racial inequality in the aftermath of the death of George Floyd in Brussels, Belgium on Jun. 7, 2020.

Belgium, (Brussels Morning Newspaper)  – In several cities in Belgium yesterday there were demonstrations against racism and discrimination. In Brussels, the action mobilised about 1,000 participants. A large group of activists protested against structural racism, Islamophobia, but also against the difference in refugee policy for Ukrainians and people of other nationalities.

Member of the European Parlament Frances Fitzgerald on this topic said that diversity, whether its gender, age, sexual orientation, or indeed a race, enriches our society both from an economic and a social perspective.
– “By ensuring that our European Union is open to and inclusive of all persons no matter what their race, we can build a better Europe.” said Fitzgerald

From the intersection of Koning Albert II-laan and Boudewijnlaan, a march went through the Kleine Ring to Albertinaplein. The march was an initiative of Platform 21/03, a collective of organisations and citizens against racism and discrimination. It organized several actions across the country yesterday. People also took to the streets in Ghent, Antwerp, Namur, and Liège.

In Brussels, the platform was already able to mobilise a diverse group of activists. The Brussels police counted about 1,000 people present at a widely supported demonstration. In addition to refugee organisations, many organisations that are committed to sans-paper, but political parties Ecolo and PVDA-PTB were also represented.

‘There is still a lot of (structural) racism in our society

Manuel Abramowicz, who is a journalist who specialises in the extreme right, also joined in: “There is still a lot of racism in our society, including structural racism. We see that there is a broad mobilisation, for example the scouts are walking along. At the same time, we see how far right is doing in the polls. The battle is not over yet.”

“A lot of people here are complaining that they are victims of structural racism from the state,” the reporter said on the spot. “In addition, I see many banners and slogans against the headscarf ban and Islamophobia.”

The Brussels student Ilona is one of them: “Islamophobia is widespread, which we see today in the headscarf debate, among other things. Often Islamophobia is not even seen as racist.”

There was also criticism of the current asylum policy in the country. Mehdi Kassou of BXL Refugees demands “that there is a safe and legal way for all refugees to immigrate and that there is a dignified reception for all refugees.” He further asks for “psychological, medical and social assistance for all refugees. The government may talk about quality reception, but this must also be provided for the people who have been waiting for months for the Klein Kasteeltje.”

There was also criticism regarding the unequal treatment of Ukrainian and other refugees. Kassou, like many others on the march, also denounced the difference in asylum policy:

After a few speeches on Albertinaplein, the manifestation ended, which went smoothly. Police were on hand to direct the march, but reported no incidents. There was, however, some traffic disruption on the Kleine Ring.